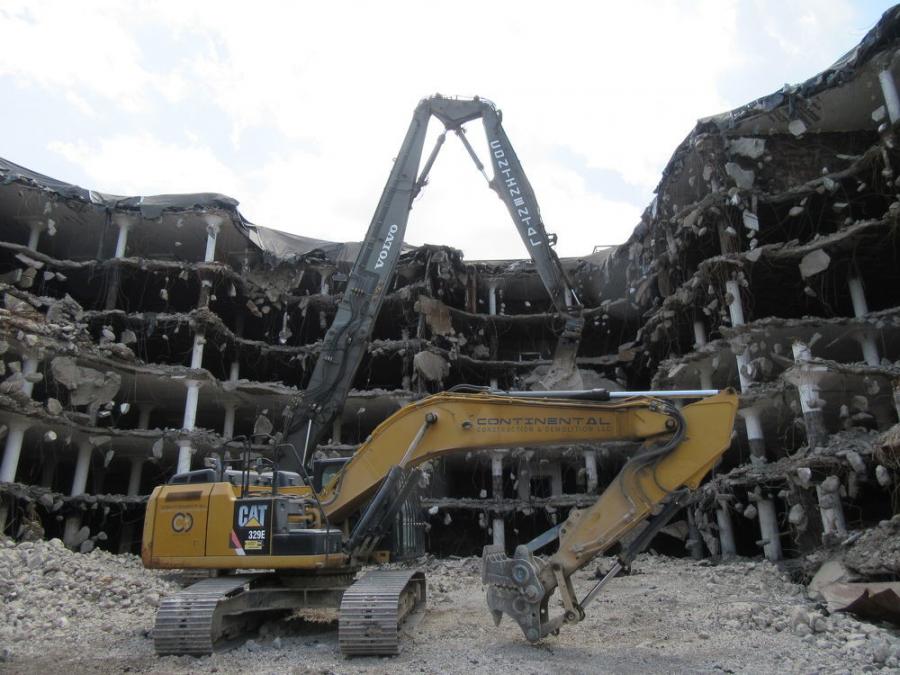 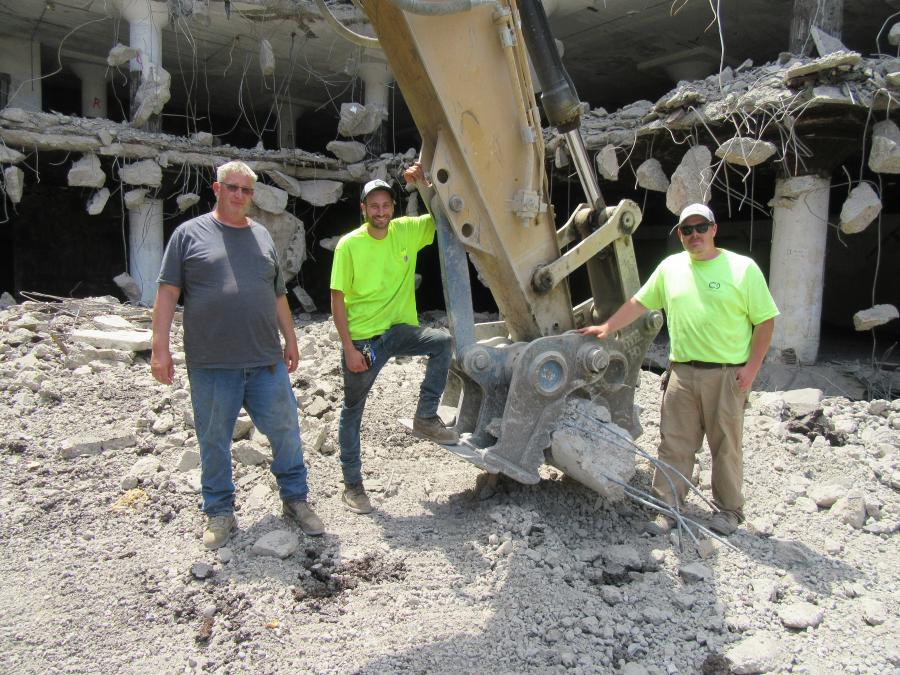 The company's projects include both public and private sector clients.

An outside observer might look at the growth of Continental Construction and Demolition and credit the company's owner, Blaze Lambing, for all he's accomplished. Lambing, who started the business while in his mid-twenties, however, is quick to give a large share of the credit to his parents, Claudia and Keith Lambing.

"I wouldn't have gotten to this point without my parents and my uncles," Lambing said. "I've been very fortunate that they had the resources and business knowledge to back me and guide me through the challenges of starting up and operating a business."

Lambing's father was in the industrial steel business and both of his uncles, Dennis and Don Franks, built successful careers in the Philadelphia area. As well as being a successful businessman, Dennis Franks also had the distinction of being the special teams captain for the Philadelphia Eagles in the late 70s. While Lambing's Uncle Dennis passed away in October of 2021 and is deeply missed by Lambing from both a personal and professional standpoint, his parents and Uncle Don continue to play an active role in the company. Along with his mother serving as company CFO, his father helps with administrative functions and pitches in on the job site to work on maintenance issues.

According to Lambing, "It takes everyone to make things work. I continue to receive support and knowledge from my family. I'll get advice on an aspect of the business from different perspectives, consider all the options and arrive at a determination on the best way to proceed. It's a process that works."

Lambing also places a high value on his employees and the equipment they use. At any given time, Continental Construction and Demolition will have three projects going simultaneously with crews of three to four employees on each job. Lambing explained that with the type of work they do, a larger crew would either get in each other's way or some workers would be idle while others were working.

Demolition work demands a strong emphasis on safety, so it's important that workers are out of harm's way from equipment, falling debris and other hazards on the job. With a smaller crew, it's crucial that they're equipped with the right tools to compete a project safely, efficiently and profitably. 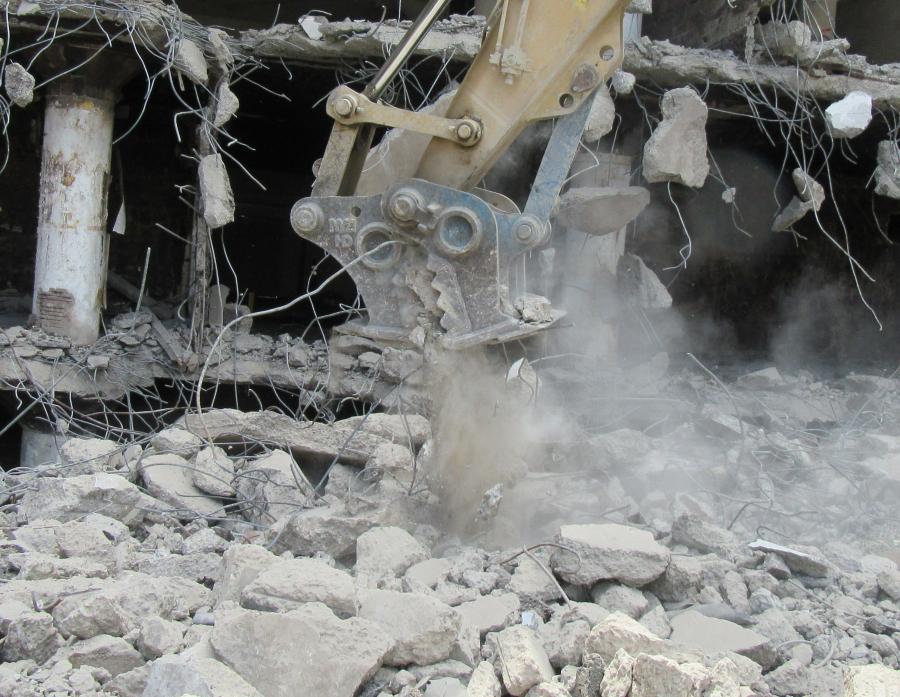 Continental Construction and Demolition has put together an equipment fleet built to accomplish all three, while positioning the company to land work which requires specialized equipment.

Two of the company's excavators are equipped for high reach capabilities, one of which can reach to 115 ft. Among its fleet, which includes excavators, skid steers and a crushing plant and screener, are a range of attachments designed specifically for demolition work.

The equipment Continental Construction and Demolition is using on a current project has proven to be indispensable. Brought in to demolish the historic Federal Cold Storage building in the Strip District of Pittsburgh, the company has faced a number of challenges. The Strip District once served as Pittsburgh's rail terminal for fruits and vegetables and the 330,000 sq. ft., seven story high windowless structure served as a cold storage warehouse for the produce.

"With an old building like this, you never know what you're going to encounter," Lambing said.

Completed in 1930, the building was constructed with double concrete block walls with a 12-in. layer of cork between the walls for insulation. The structure was supported by a series of 30 in. diameter columns constructed of poured concrete reinforced by a birds' nest of rebar.

To add to the degree of difficulty on the project, one of the outside walls abuts a building which houses a bar that its owner has determined must be left standing. As with many older buildings, the outside walls are irregular and the space between the two structures varies greatly, with an average clearance of less than 18 in.

Initial demolition involved going floor by floor to strip the interior, including removal of the cork insulation. To accomplish this, the company brought in a generator to make the original 1930s freight elevator operational so they could transport mini excavators up to each floor.

The front of the building was 95 ft. high, and the top of the building was cut into sections with a track mounted wall saw for the horizontal cuts and diamond wire saw for the vertical cuts. Each wall section (consisiting of 12-in. thick inside wall and 18-in. thick outsite wall) weighed approximately 67,000 lbs., and a 500-ton Grove crane was brought in to lower each section to the ground.

Once on the ground, the company brought in its Caterpillar 329 excavator equipped with a NYE 25CP47 pulverizer recently acquired from National Attachments for secondary processing. The company's high-reach Volvo EC700B excavator equipped with a shear continues with demolition of the lower floors, providing more materials to be processed using the NYE 25CP47 pulverizer.

"This is the third NYE pulverizer we've purchased, and we really put them to the test. I like the design and the support we get from National Attachments is great," Lambing said. "National Attachments' Gabe Guimond is a wealth of knowledge, and I can call any time and get him on the phone to answer questions or address an issue we might be having. We use the pulverizer for secondary processing and to size material and separate rebar in demolition. We also use them to size recycling materials for our crushing plants which we then screen and sell.

"With the volume of rebar we've encountered on this job, without the NYE pulverizer it would be tough to convert the materials into recyclable products. Not only do we use them to crush materials, they can also be used for picking the rebar once it's been cleared from the concrete"

According to Lambing, the company's NYE pulverizers have proven to be one of the company's most essential and frequently used attachments. As well as the company's recently acquired NYE 25CP47, it also owns two NYE 30CP47s. 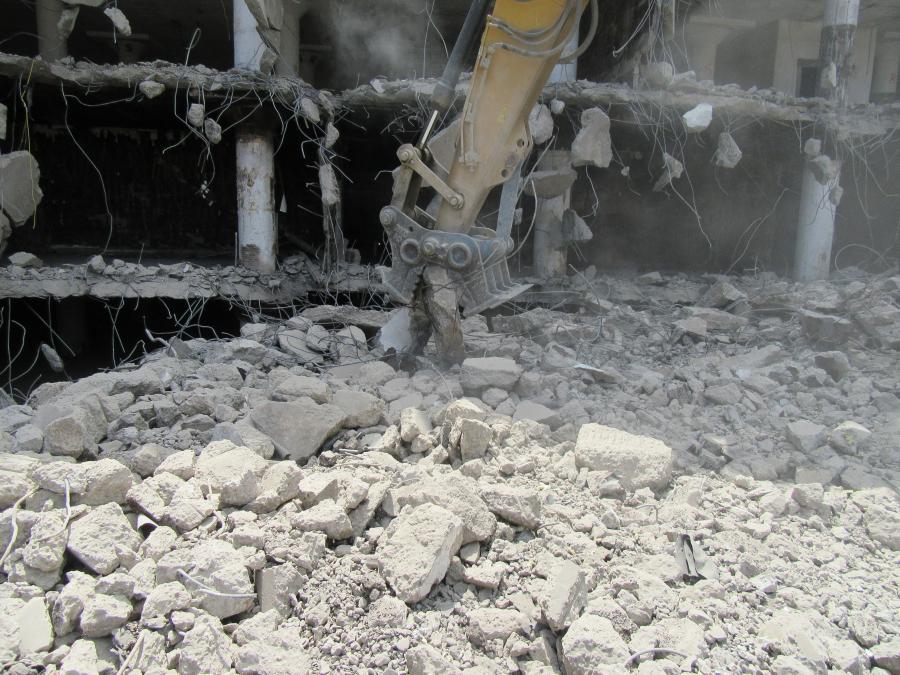 Engineered for both primary and secondary crushing operations, NYE CP4 concrete pulverizers' biomimetic crushing jaws are modeled after wolves' bone crushing molars and canine fangs for grasping and puncturing material while protecting the nose-plate from wear.

The attachments are constructed from extra thick quenched and tempered alloy plate. As opposed to being pinned into place, the alloy teeth are securely welded to eliminate the potential of them falling out and possibly jamming a crusher. The patented four position ripper shank for picking, prying, lifting and flipping heavy slabs is an available option.

The attachments are built to accommodate replaceable wear parts and feature massive torque tubes to absorb twisting forces. They use existing bucket cylinder for power, so no extra hydraulics are required. NYE CP4 concrete pulverizers are easy to install with either quick coupler or pin grabber compatible versions and are safe and silent to operate, the manufacturer said. CEG