Sukut Makes the Grade in California 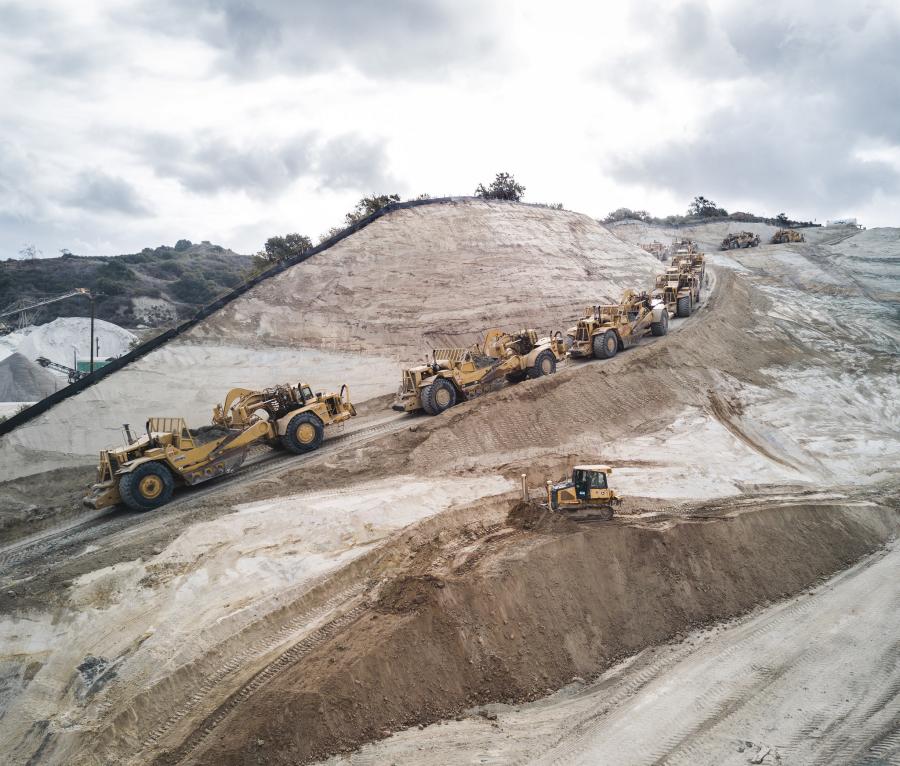 After the recent statewide droughts, preserving water bears a new meaning in California. The Santa Margarita Water District is ushering in a new era of water conservation for South Orange County by purchasing and improving the half-century old Trampas Canyon Dam.

The more than $100 million dollar project is ambitious — within two years, the dam will rise forty ft. taller and the existing reservoir will accommodate 1.6 billion gallons of recycled water. With millions of yd. of earth to move and tight tolerances to conform to, only an experienced contractor with a serious fleet could complete this job. The Santa Margarita Water District awarded the contract to Sukut Construction, a firm with a long history of dirt projects in California. 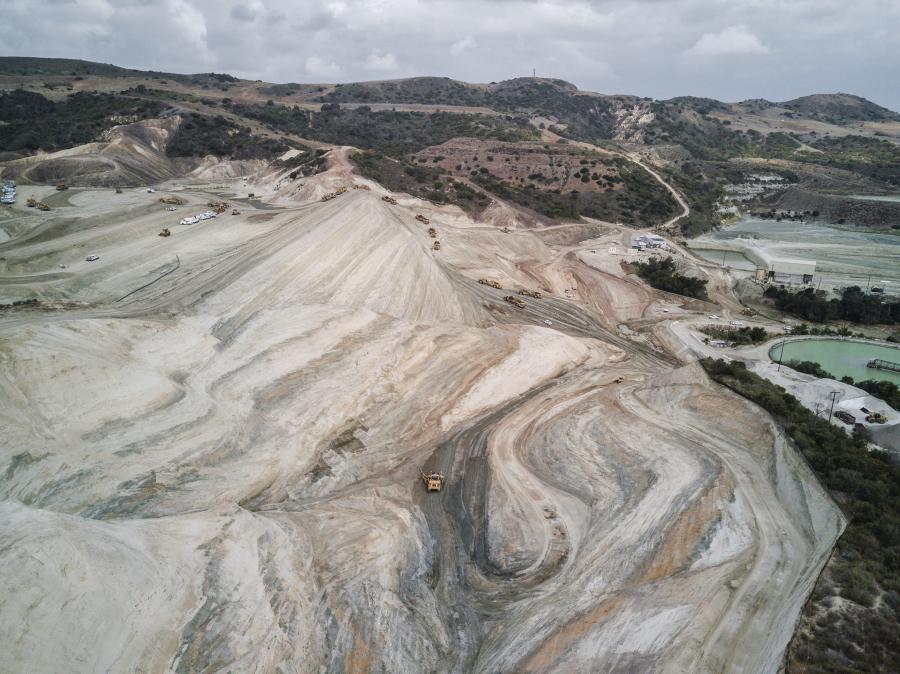 When raising the top of a dam forty more ft., the base of the existing structure is the starting point. Decades of debris and sediment buildup at the base of the dam formed an unstable foundation. Before building the new section of dam, nearly a million yd. of suitable and non-suitable fill material needs to be removed to expose the bedrock across the width of the dam's base. All material is stockpiled above the dam, accessed only by a steep single lane road. 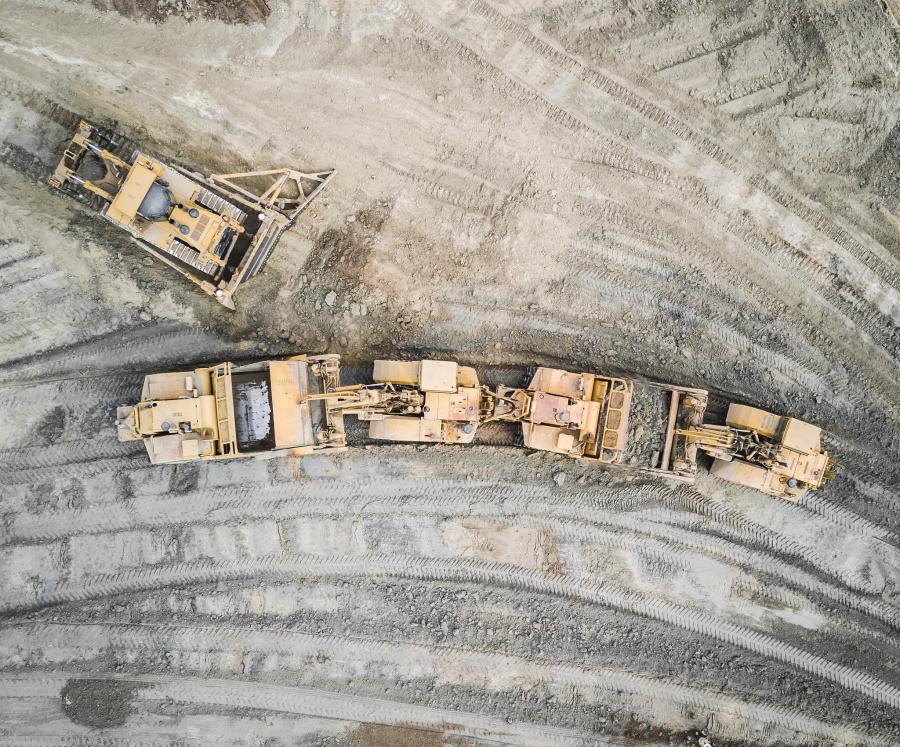 As soon as the bedrock is completely exposed, the contractor will haul stockpiled fill material from above the dam back down to the base to start filling all the way up the face. Eventually, the fill will reach forty extra ft. above the top of the existing dam. The new structure is essentially a new outer layer all the way up the front of the existing earthen dam with a forty-ft. cap on top of the new and existing layers. With nearly a million yd. of cut at the base and nearly four million yd. overall, the biggest earthmoving equipment is necessary to finish the project within the schedule.

Sukut Equipment deployed eighteen of its 657E twin engine scrapers and multiple large dozers with GPS and slope boards to build the job. Twin engine scrapers are the natural choice due to their capacity, ability to self-load and ability to climb the extremely steep incline up and over the dam to the borrow site. Rigid trucks could haul on the same route, but they would travel much more slowly up the hill and wouldn't be as cost effective.

All the 657E scrapers Sukut has on the project are repowered, meaning they're outfitted with the latest Tier 3 engines to comply with modern emissions standards. While an expensive transition, the project team prefers repowered machines due to their power and fuel economy. 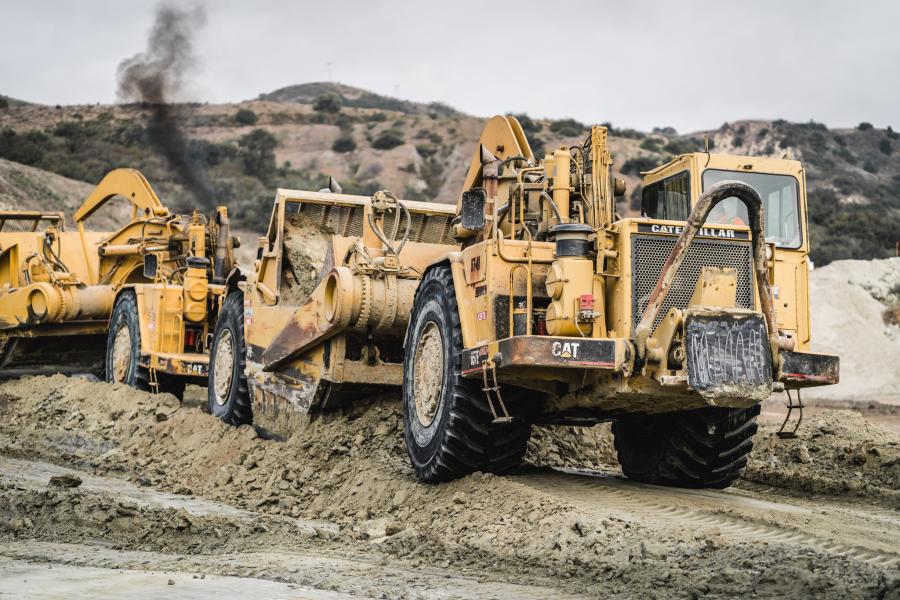 Eighteen scrapers are cutting to bedrock for the first four months of the project, but when filling, Sukut will reduce the fleet to eight scrapers to allow for a steel wheel compactor to make a minimum of eight passes on each lift. The dozers also are crucial to the operation as they check grade and dictate where the scrapers cut using GPS.

The technology allows only two grade checkers to ensure everything is tidy on the project — typically, a project this size would require four grade checkers plus surveyors. All GPS modeling is completed on site. The dozers have slope boards to form a clean and smooth face, a project requirement, as they work their way to bedrock.

Three full-time mechanics keep the fleet moving as it should, and Sukut Equipment even has a spare 657E scraper and D10 dozer standing by when machines go down to maintain production during repairs.

The new dam face will feature a drainage system made up of aggregate and pipe, but the old dam no longer has a similar system in place. At the bottom of the dam, water is continuously pumped away from the cut and an excavator will load the last 40,000 yd. into the scrapers since the saturated material is too soft for self loading. Sukut also needed to excavate an additional 200,000 yd. that wasn't expected.

Working Around the Clock

The Santa Margarita Water District needs the reservoir operational in less than two years. This time crunch means that Sukut will run two 10 hour shifts each day once they begin to build the dam back up — scrapers and compactors will run night and day to raise the dam in. at a time.

Sukut Construction and Equipment crews are on track to complete this project in the next year and a half.

You can view videos of Sukut's latest projects on their YouTube channel here.

CDE, a supplier of wet processing solutions for the natural processing and waste recycling sectors, has revealed its new AquaCycle A2500 thickener, the latest addition to its water management and recycling systems.

Mechanical Irrigation Solutions (MIS), located in Yuba City, Calif., (the heart of production of peaches, plums and pistachios in the United States), was established in 2009 by Jas Thiara, a second-generation farmer.

Volvo Construction Equipment Services will be supplying Sandvik's comprehensive range of mobile crushing and screening equipment and full aftermarket support for customers in the state located north of the San Bernardino line.