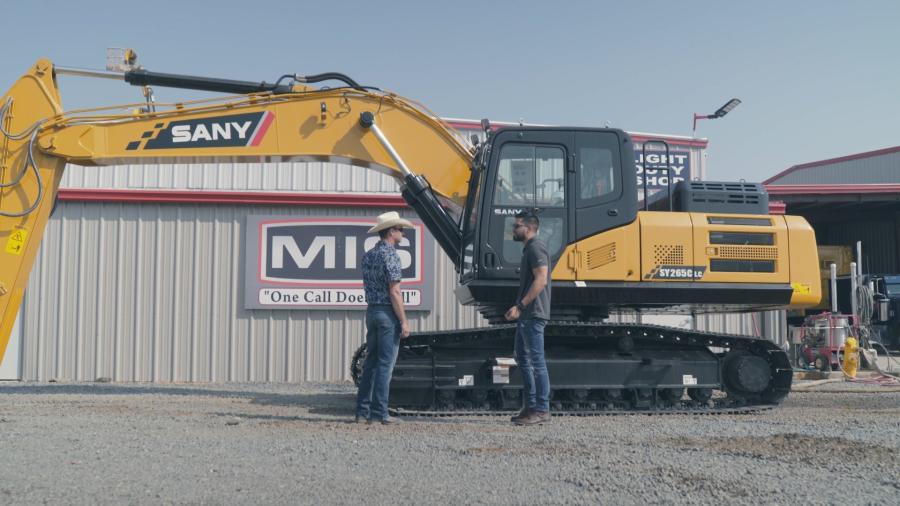 Jason Longwell (L), a contractor, talks with Manik Thiara about the benefits of the SANY SY265C excavator at MIS headquarters in Yuba City, Calif.

Mechanical Irrigation Solutions (MIS), located in Yuba City, Calif., (the heart of production of peaches, plums and pistachios in the United States), was established in 2009 by Jas Thiara, a second-generation farmer. Thiara's history in the agricultural community is long. He came from a farming family with a passion for soil and equipment; and he was able to build his own prune harvester at the age of 16. 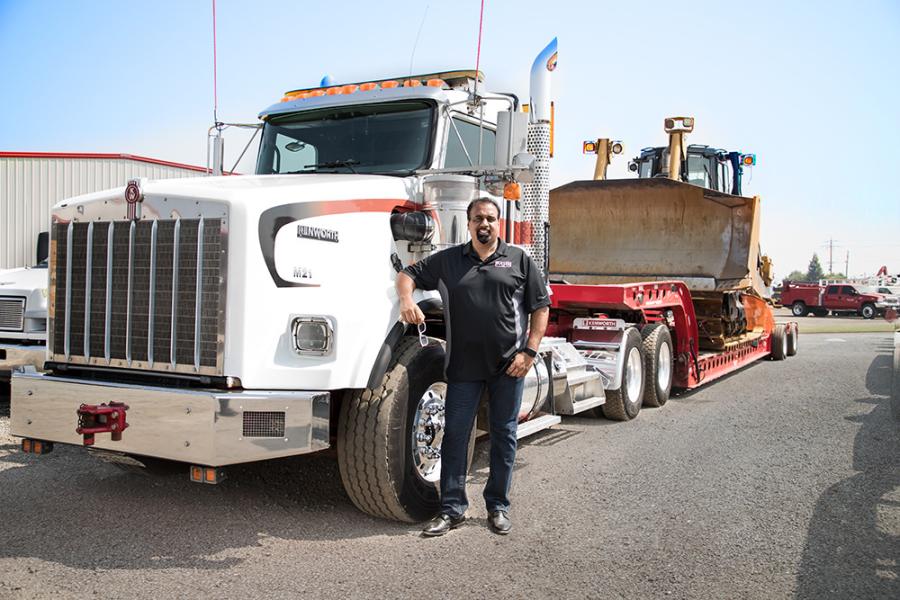 This passion for agriculture led him to buy Kilby Manufacturing, a harvesting company in the area in 2009, where he continued to grow the business and began building equipment onsite. Thiara always knew that he would stay on the aggregate side of the business, but his son, Manik, had a different plan.

Manik Thiara currently is the vice president of sales of MIS. He is known as a "local" kid from this small town. Being around heavy equipment was second nature to him, but Manik felt that the aggregate business was too slow paced for his liking.

Although Manik came from a long line of farmers in his family, farming just wasn't his passion. He was a basketball star in high school where he was a four-year varsity player and four-time all-city player. Manik went on to Consumes Rivers College, where he played basketball for one year, until he was recruited to play professionally in Spain. This was Manik's dream to be recruited to play for the Euro-league, where he was one of two non-European players on the team. During this time, Manik completed his engineering degree thru ASU online.

While in Spain, Manik's father had purchased a 30-acre lot on the frontage road off CA-99, the busiest highway through Yuba City. This acreage would become MIS. The timing couldn't have come at a better time for Manik, who returned home from Spain to rehab after suffering an injury. It was during this rehab that Manik realized he had a choice to make. He knew that this was the time for him to help build the business his dad had started. Manik made the decision to stay home and told his coach he wasn't going back to play on the team, he had "business to take care of."

Taking a Role in Family Business

Manik wanted to take an instrumental role on the construction side of things, while the focus for MIS had always been on the development of land, with its various amounts of GPS laser levelers, ripping ground with dozers from a D6 to the D11, a low bed and a truck. In 2017, MIS introduced the rental side of the business. One of the key factors to the success of its rental business was to only rent newer pieces of equipment. MIS won't rent anything more than two-years-old. Its business philosophy is, "if someone is renting a large, or even small piece of equipment, they deserve to experience a new piece of equipment, without worries of equipment problems or failures."

Often, its customers are small business owners who are just starting out and have difficulty with established credit to purchase a piece of large equipment. MIS loves helping these emerging contractors and goes the extra mile by offering a rent-to-own option, where if you rent a piece of equipment for a year, they will then apply 70 percent of your future payments toward your purchase of that piece of equipment. Manik enjoys helping start-ups and has one contractor that has purchased their third piece of equipment. 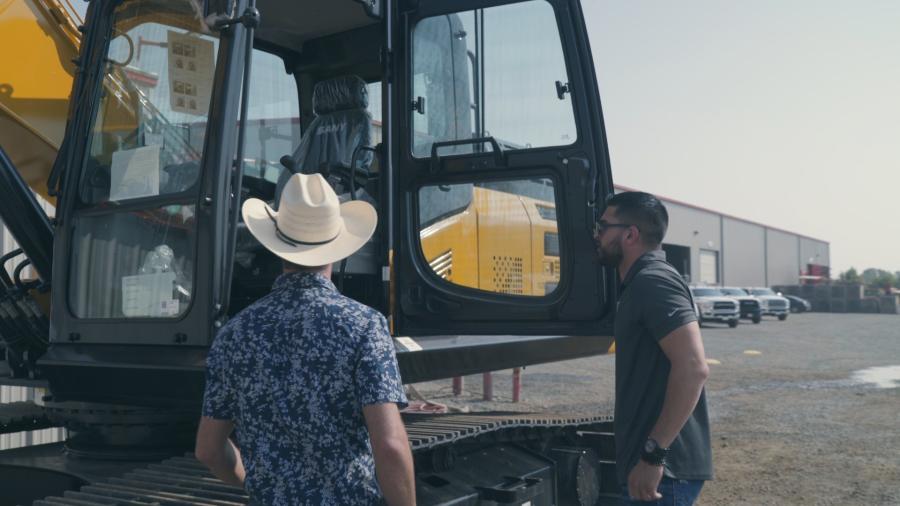 Once the rental side was going strong, Manik saw the opportunity to build the trust of manufacturers and decided to start the dealership side of MIS. They started with SANY, who was still trying to make headway in the U.S. market. Since that time, SANY has soared to second in the worldwide market. MIS has had great success with the manufacturer and has increased its sales 180 percent in two years, according to Manik. The company attributes the increase in sales to staff and increased brand recognition. John Fair, regional business manager of SANY, commented on the growth within the company, "SANY has become the world's number one company in excavator sales with a 15 percent market share and the number one excavator brand globally, selling 98,705 excavators in 2020."

Its second manufacturer line was Wacker Neuson — brought in for its wide variety in equipment and smaller components, to really back-up the MIS slogan, "one call does it all." This addition was followed up by adding in LiuGong.

MIS also is equipped with a complete fleet of heavy haul trucks and trailers.

For a company as diverse as MIS Inc., Jas and Manik Thiara knew they needed captains in each division for each one to succeed to maximum potential. They recognized the need for strategic input from all divisions and adapted to newer marketing points. Manik is poised to continue the brand growth, adding lines, inventory and additional customer service to MIS. When Thiara passed the reins on to Manik, he urged him to lead the team.

"Everyone knows you as a basketball star, use what the game taught you," Thiara told his son. "As a point guard, he led the team and called out plays, and if someone messes up, you own it and make things right for the customer."

Manik is passionate about building relationships with customers and always treats each one the same whether they are buying one machine or five machines. His most memorable sale was when a customer came in and bought an 8500 excavator for his personal use. Manik had no idea that he worked for a forestry company, let alone that he was the purchasing agent for one of the largest forestry companies in the state. The following week the customer called and commended the service that was provided by Manik and brought in his boss. MIS hosted them in their conference room with a catered lunch, where the forestry group ended up purchasing $1.2 million in machinery.

The company continues to evolve. It currently employs 60 people, but during harvest season, it increases that number due to needing more hands on deck. Manik has been working with local trade schools and is in talks with them for a simulator training program in 2022. MIS acquired a simulator from SANY and is very effective in training up and coming trade students.

MIS has received many awards in its short time in this segment. It is one of SANY's top service dealer in the nation. Manik also serves on the dealer council at SANY, a huge honor to be voted on the board by his peers. He is honored to have earned that respect from his peers as the youngest person on the council, a position he does not take lightly. According to Thiara, "I've learned so much from the other members on the dealer council, I try to just soak it all in and bring that back to MIS." He has been an advisor to the manufacturer on how to market in the United States. He visited the SANY plant and sees what goes into building its equipment.

MIS also was a top dealer of Wacker Neuson and earned the top position for 2020/2021 in the Pacific Region. The company has been named Dealership of the Year in the area in back-to-back years. When Jas passed the business over to Manik, sales have only gone up and Manik is looking to the future and taking over the northern California market. Manik also serves on the advisory board at Wacker Neuson and continually strives to provide assistance to other dealers. 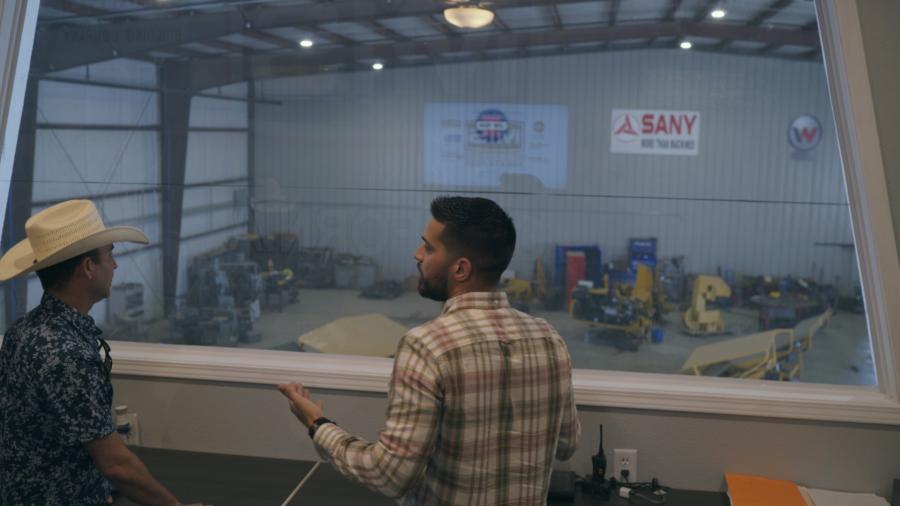 "I feel like we can really help out our customers and even other dealers with getting parts and service-related issues," Manik said.

Manik has the same philosophy when it comes to his customers. They know they can call Manik anytime, including nights and weekends. He is always there. If a customer's equipment is down, he will give him a rental to use to be up and running. Learned from his father, if a machine is down, you do what you can for them.

"Don't try to reinvent the wheel, show you care and that you have a plan B — it goes a long way," Manik said.

According to Manik, he has every size machine, every attachment on the lot. His inventory is stocked and keeps an eye on all of it, understanding that you can't rely on shipping right now.

Manik is looking forward to the future of MIS. He understands the importance of being in a field of work that you love and having faith in your market. He understands the value of the brand and it's fast-paced growth. He appreciates the personal relationships with customers and the CEOs of the manufacturers he represents. MIS has purchased real estate in central California and in Nevada for future expansion.

MIS, located in Yuba City, Calif., is a local, family-owned company. It has created a diverse market with its ag equipment, rentals, sales with SANY, LiuGong and Wacker Neuson.