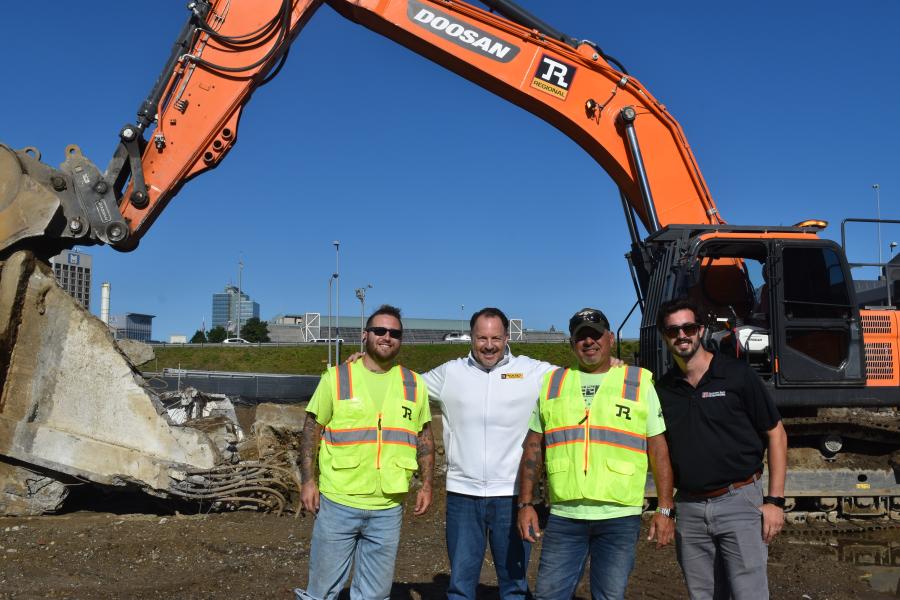 Today, Regional has a fleet of 10 machines and employs 27 people.

"It's so important to have key employees who stick with you over the years," said Oppenheim. "Guys like John Silva, senior job superintendent, who has been with me 12 years. We've been in business since 1994 and we have had our ups and downs. We're rocking and rolling now and it's because of guys like John, who care. Guys that push to get the job done but push it within reason to keep the job site safe." 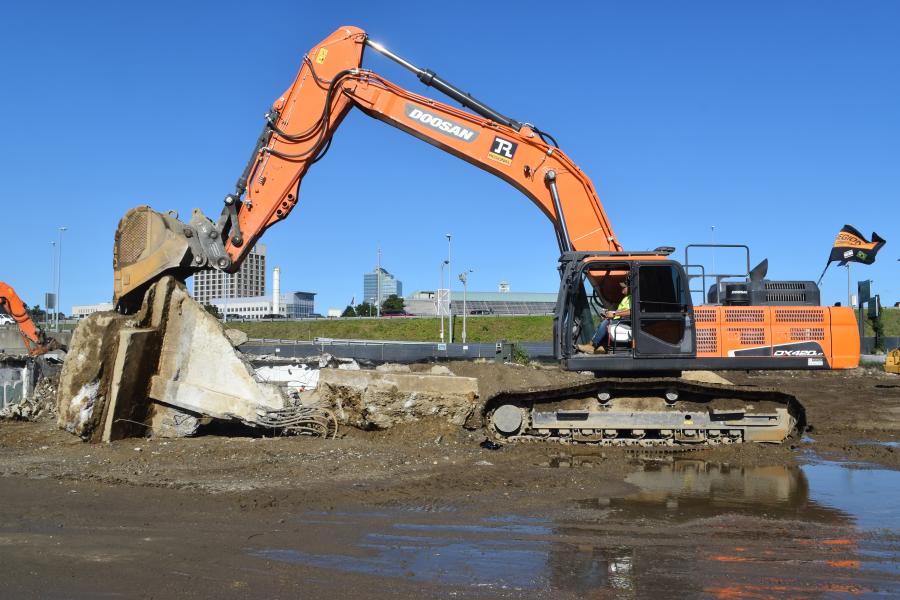 Other key contributors to Regional's growth, according to Oppenheim, includes Labor Superintendent Thais DeSouza, who has been with the company for 16 years; Senior Project Manager Larry Hurley, who has logged 30 years; and Vice President Mitch DeLorenzo, who has been with Regional for six years.

Oppenheim's first project was in Attleboro, Mass., taking down the Sturdy Lantern Company to make way for a new Shaws grocery store. By the late ‘90s and early 2000s, he was able to upgrade his equipment fleet and progressively started to tackle larger demolition projects.

One of the company's early breakthrough projects was the demolition of the 600,000-sq.-ft. Sealtest ice cream facility in Framingham, Mass., with 30,000 tons of concrete, 10,000 tons of steel and 5 million lbs. of stainless steel.

Another substantial project was the Draper Mill Factory — an old manufacturer of looms. Regional salvaged more than 1 million board ft. of southern yellow pine and approximately 8,000 tons of steel from the 1.3 million-sq.-ft. facility. The project took 14 months and was completed in 2021.

And yet another important project was at the site of the former Exxon Mobil Tank Refinery in Stratford Conn. There, Exxon manufactured the big tanks used in the refining process working out of a 750,000 sq.-ft. complex. Regional's demolition work included recycling 25,000 tons on concrete on site as well as material removal and site remediation.

Onsite crushing is not uncommon for Regional. It owns a portable tracked crusher, which has become a very profitable part of its operation.

"It has become far more common for us to crush on site because there are fewer and fewer facilities that will accept broken concrete and brick," said Oppenheim. "It's becoming a ‘Lead Green Item,' where if the site is conducive to taking the material as backfill, a lot of developers and general contractors do want you to crush on site and it saves them money. They don't have to buy as much gravel and they save money on trucking."

"We've done a lot of work for Amazon, and we do a tremendous amount of work for apartment building developers, some of the biggest developers in New England," said Oppenheim. "That's almost all of the work that we've been doing for the last four or five years; it's apartment complex driven … old commercial, unproductive and abandoned sites that developers are purchasing and putting up hundreds of apartments.

"We pride ourselves on beating all of the deadlines; get in and get out as fast as possible, which helps the site developer move faster and assures that we will get preference on the next project."

Currently, Regional is working on a demolition in downtown Worcester, the former Mount Carmel Catholic Elementary School, which was built in 1821. Approximately 75,000 sq. ft. with reinforced concrete floors, the contract included asbestos removal on the 3.2-acre site.

Regional was given four weeks to complete the project; it will be in and out in 11 days. Because, in part, of its aggressive work ethic, Regional should hit a goal of $15 million of demolition work in 2022.

Over the past year, along with a couple of other members of the team, Oppenheim started a new division of the company called Regional Restrooms, a company that rents porta-johns on job sites throughout New England. Often, they end up renting to the developers who build on the sites after Regional completes its demolition projects.

Equipment Is Backbone of Operation

"We live and die each day by how reliable our equipment fleet is and how much we can depend on the dealer who services it," Oppenheim said.

"Our fleet is made up of Doosan [DL420 loaders and DX420 excavators] that we purchased from Equipment East. The transition to Doosan started several years ago when Kyle Brockway with Equipment East challenged us to try it. We very skeptically gave Doosan a try and we loved it. We traded in our existing machines and have moved forward with Doosan ever since. In fact, we are currently working with Kyle on purchasing a 350-sized machine. We want to have an 80,000-pound machine added to our fleet.

"When buying from Equipment East, Kyle consistently puts together the most aggressive lease-purchase program that we have seen anywhere in the industry. Nothing else compares. 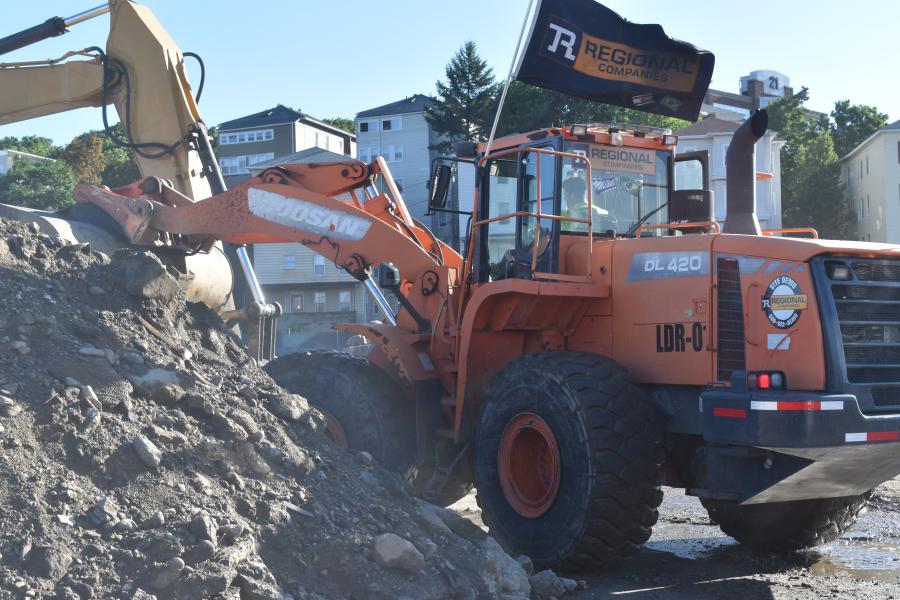 "Demolition is a brutal business. With the type of work that we do, machines are going to break. It's what happens after you break them that really determines what kind of equipment you're dealing with and what kind of dealership you are partnered with.

"In this day and age of high technology and supply chain issues, it's tough for everybody, but when push comes to shove, when we need them, Kyle has hit the right buttons and Equipment East has worked with Doosan to come through for us every time."

There are certain features of the Doosan machines that The Regional Companies are really sold on, including the backup cameras and the transportability.

"The backup cameras are excellent. Great visibility, and in our business of tearing things down in tight quarters, that is very important. We really like the transportability; you don't have to take the counterweights off to move it. Yet it's a 100,000-pound excavator that you can move as a one-piece load, far less time consuming when you are transporting."

In the demolition business, an excavator is only as good as the tool at the end of the stick and for years Oppenheim has been very particular about what he insists on for his Doosan excavators.

For hydraulic hammers, it's Ramfos hammers from Equipment East.

"They are powerful, they are priced right and after thousands of hours of use they've proven to be dependable and I get the support I need from Equipment East," Oppenheim said.

Equipment East has nearly every attachment from mechanical grapples to concrete pulverizers and more that is needed to get the job done.

Regional Companies works primarily in Massachusetts, but has been making inroads branching out to Connecticut, New York and Rhode Island. CEG