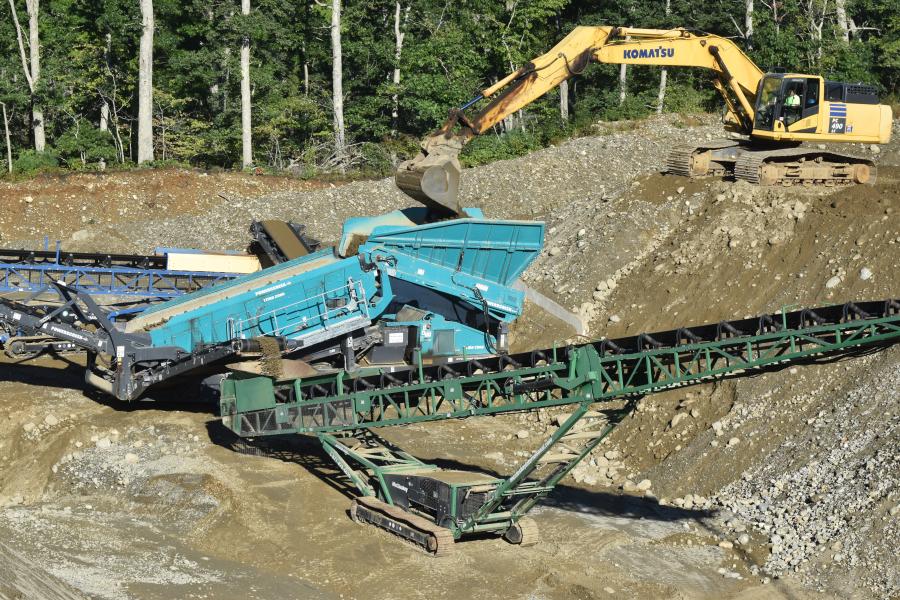 A Komatsu PC490 with an oversized bucket is perfectly matched to keep the Titan operating at peak efficiency. (CEG photo)

Petrowsky found the right property located at Millbrook Road, Plainfield, Conn., and he found the right individual to run his operation, Richard Cheney, who has decades of experience in construction equipment and aggregate production. 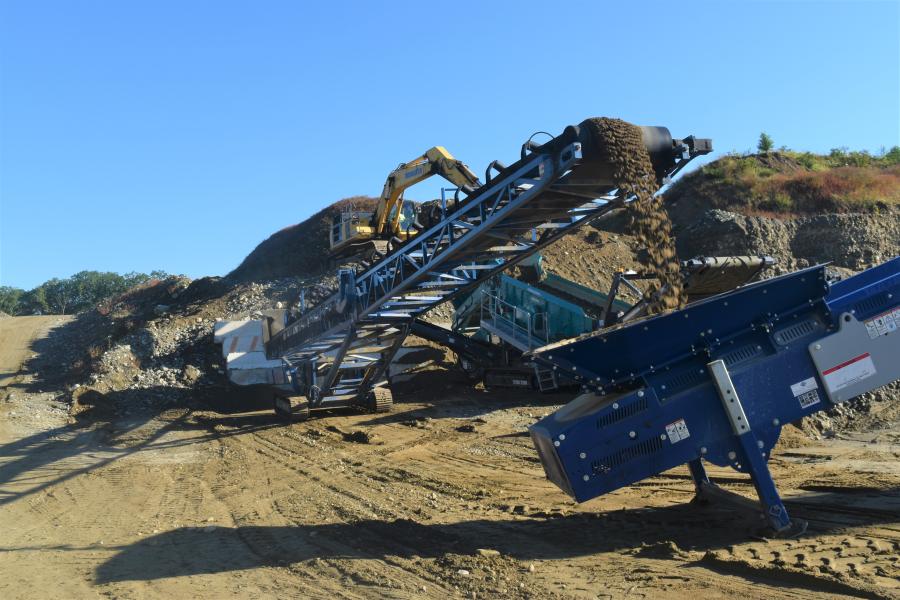 The next step called for putting together the right spread of aggregate processing equipment to maximize efficiency and production levels. Several different aggregate plants were brought into the site in a search to find what setup would be ideal for the type of aggregate, the conditions at Millbrook Road, and the type of product whose goal it was to produce, namely a high-quality sand for asphalt production.

In came Graham Wylie with the new Titan model 2300 from Powerscreen New England. The Titan 2300 was so new that the plant that ended up in the Sammy P Inc. plant was the first of its kind to ever arrive in the United States.

Powerscreen is among the world's leading providers of mobile crushing and screening equipment and the new Titan 2300 is a new scalping screen designed to provide a cost-effective solutions for larger applications.

The Titan 2300 is a completely new machine to Powerscreen in terms of concept and design. The massive 64 -in. oversized belt feeder, which moves material from the 6- by 20-ft. deck immediately gave Sammy P's operation significantly higher production levels. Powerscreen of New England had promised an increase of production of at least 50 percent. In fact, the production levels increased significantly more, which also resulted in an over 50 percent cut in fuel consumption.

"The screening deck on our previous screener was 5 by 16. The difference between the 5 by 16 and the 6 by 20 on the Titan 2300 was astounding," Cheney added. " We see even additional fuel savings with the number of cycles the excavator has to make to feed the hopper and the number of trips the loader has to make to carry away materials.

"We finally have our excavators and loaders paired up with the right size plant. Under the right conditions with dry material, we can open up the hopper extensions on the Titan and increase our production levels even more."

According to Cheney, "Depending on type of material, before the Titan their plants were producing 750 ton of sand in an 8-hour day compared to their current production levels of 1,250 ton plus in a typical 8-hour day. With a hopper capacity of 14 yards the ability to increase production levels was immediate and substantial."

According to Cheney, "It's quite plausible that the Titan could hit significantly higher production levels, perhaps as high as 200 to 250 tons per hour of sand if the material fed was less rocky. Unfortunately, their sand condition is quite stony and is always going to limit the production levels. Because the new machine has 42-inch side conveyors, the plant is now capable of handling much larger volumes of rock. The term for our type of sand is bony and bony material takes longer to process. 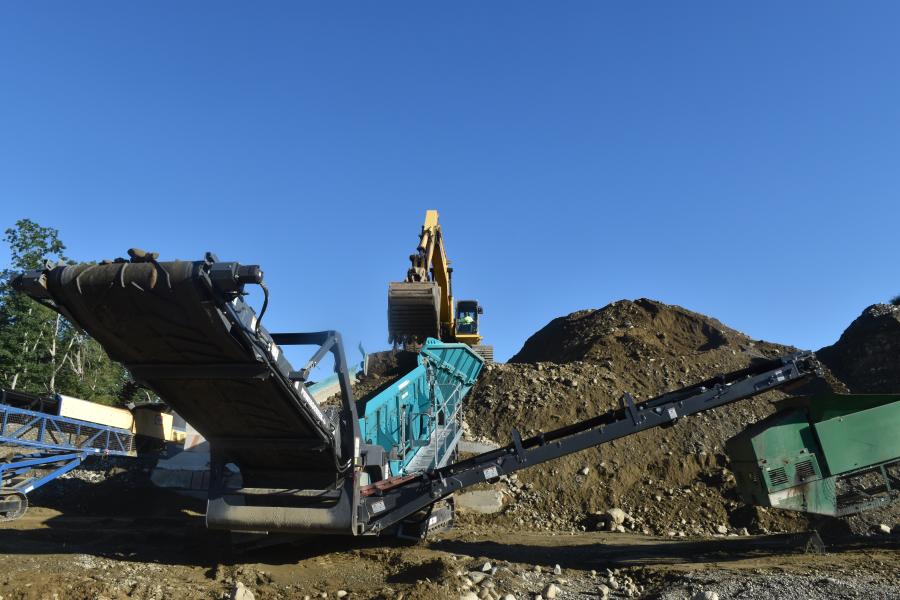 Wylie added "When I evaluated Sammy P's situation one of the challenges I identified was precisely the amount of stone in his sand, and the width of his conveyors on the existing plant. His existing plant had 35-inch and 55-inch stone conveyors, and they were running at full capacity. My research showed that the Titan machine had stone conveyors measuring 42 inch and 64 inch with twin drive. Therefore, the Titan machine would be able to process a much greater volume of sand for Sammy P because it could handle removing a greater volume of stone."

Cheney continued "There were a lot of factors in determining what plant to buy. This decision was relatively easy. The Titan was by far the best engineered plant to handle the type of material we are processing and to achieve the spec we are looking for."

"We've known Seamus Sheelan, president of Powerscreen New England, and Graham Wylie, his sales rep, for a long time. Certainly, more than 20 years. So, I was confident I was dealing with people who are stable, who have a great reputation, and were going to be here when I need them," Petrowsky concluded. CEG