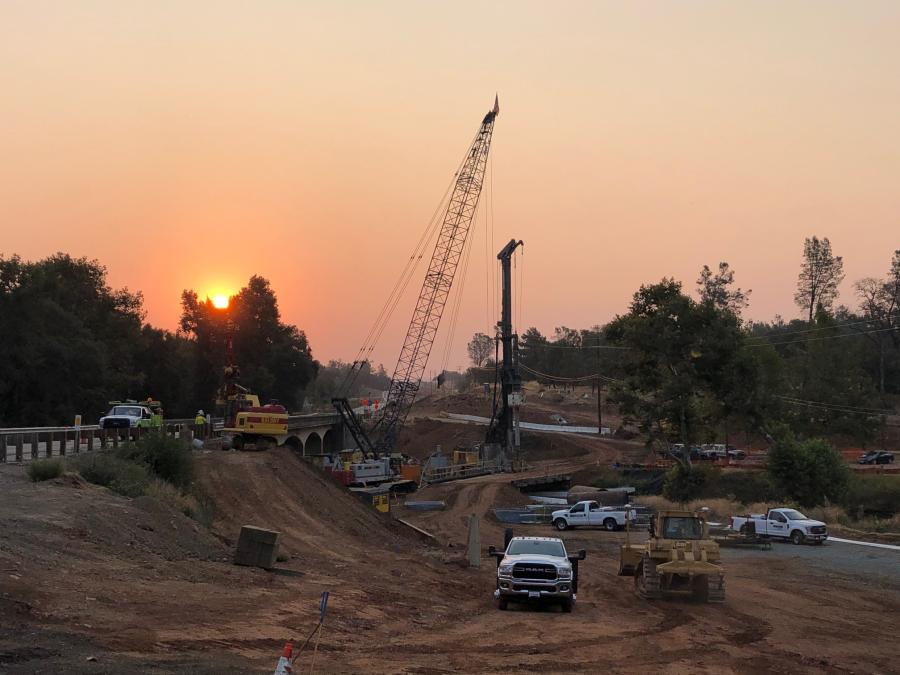 Crews from Teichert Construction are wrapping up work on the California Department of Transportation's (Caltrans) Yuba 20 Corridor Roadway Projects. The contractor currently is performing work with a bridge replacement on the State Route 20 Browns Valley Bridge and pavement rehabilitation. Final paving and striping work was recently completed in August while the remainder of the project checklist is expected to be completed in September.

The $65.5 million Highway 20 Browns Valley Project, awarded to Teichert Construction, covers the area between Marysville Road and Parks Bar Bridge. The work has crews resurfacing, restoring and rehabilitating a 4.5-mi. section of roadway; widening shoulders to standard 8-ft. widths; constructing a new Dry Creek Bridge that meets current design standards and has a multi-use pathway; straightening the curve between Stacy Ann Drive and Sicard Flat Road; and flattening the slope of the roadway between Valhalla Way and Digger Pine Lane.

Like any major construction projects, this one had its challenges.

"The biggest challenge was in how to move the nearly 300,000 cubic yards of excavated material in place alongside a functional highway," said Danny Warren, Teichert Construction's project manager.

"Due to the number and size of the rocks, both before and after blasting, it wasn't feasible to use highway trucks to move the material. We were able to create a plan of attack that allowed us to use non-highway articulated rock trucks to move the majority of the material while maintaining two-way reversing traffic control. We worked on one side of the road at a time, keeping two lanes of either existing, or temporarily constructed highway open for traffic at the end of every shift. We had to work both sides of the highway to construct the widening, sometimes with traffic in the middle. However we were able to mostly work one side at a time. 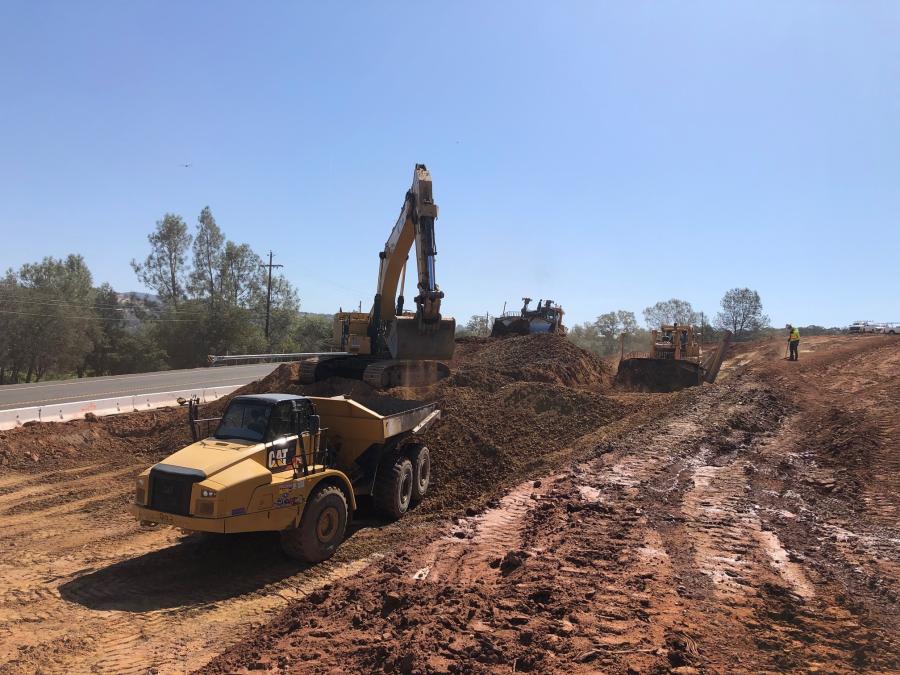 "There was a significant amount of hard rock that required drilling and blasting prior to excavation," added Warren. "It was a tight work zone, however we were able to work with the State to rearrange the staging and sequencing of the widening to allow for a little more room and less traffic pattern swaps."

The project has been a day and night operation.

"Safely handling public traffic through the roadwork was one of our primary concerns and as such, we spent a lot of time reviewing the stage handling plans and revising them with the state to keep the public's convenience as a priority," said Warren. "We were able to make some changes to the sequencing of work to minimize the number of lane closures and traffic pattern switches, which we believe made the public's conveyance through the job both safer and less restrictive while also allowing us to be more productive. We believe progress was more than satisfactory as we will end up completing the project in less overall working days than the contract allowed for.

"The project team worked very well together and we would categorize the working relationship with Caltrans as world class," added Warren. "Through numerous partnering workshops, we developed a lot of trust with each other and were able to solve issues at the lowest level possible, only elevating when necessary."

The resurfacing, restoring and rehabilitating of the roadway was far from easy.

The highway was built via an asphalt surface, with a subbase and base.

The new roadway section is approximately 9-in. thick.

"We are able to put traffic on the new asphalt the same day it is placed," said Warren.

The widening of the shoulders to standard 8-ft. widths was completed at the same time as the roadway rehab and repaving. The straightening of the curve between Stacy Ann Drive and Sicard Flat Road and flattening of the slope of the roadway between Valhalla Way and Digger Pine Lane followed a similar plan of attack and used similar equipment,

The old Dry Creek Bridge had two lanes and was 400 ft. in length.

"All traffic was left on the existing bridge while the new one was constructed," said Warren, "then traffic was moved over so the old bridge could be demolished."

"We started with the center bent foundations, then the eastern abutment followed by the western abutment," said Warren. "The superstructure was worked on all at once. The foundation work was very challenging due to the existing soil conditions and bedrock plus groundwater."

The bridge took about one year to construct, which included a falsework system.

"It was placed on temporary steel piles," said Warren,

Various sized cranes, brought in by the subcontractors working on the bridge, were used, with excavators helping with the demotion operation.

"We had a great team and we worked extremely well with the Caltrans project team," said Warren. "Our crews are amazing and performed tremendously on this project. They achieved all production goals set for them, while suffering zero lost time incidents."

The demolition and excavation operations generated 8,000 tons of asphalt and 600,000 tons of earth and rock. 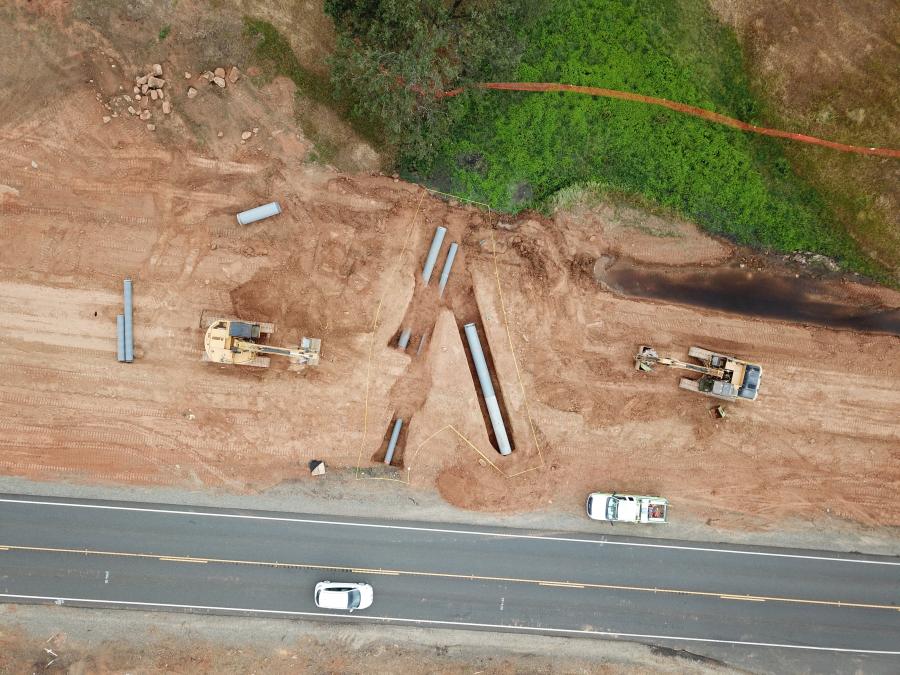 "All of the earth and rock was used for new embankment fills on the project," said Warren. "The asphalt was taken to Teichert Materials' Hallwood plant where it is being recycled into new asphalt. Recycling is very important to us. We are always looking for ways to reuse materials on-site wherever possible."

The amounts of new materials, including concrete, asphalt, steel and pipe are being tabulated.

"Most wear and tear is to tires and other wearing surfaces such as cutting edges and teeth," said Warren. "Teichert has its own mobile equipment division with in-house mechanics that can generally get things moving for us the same day. We have mobile mechanics that can be called out to jobs for service as necessary. Good maintenance starts with good housekeeping and inspections. Our crews visually check the equipment each shift before operating and report any wear and tear to our mobile equipment division ASAP, so we can catch things before they become catastrophic.

"Our mobile division works directly with the dealers and rental companies to ensure that all parties are treated fairly and equitably so that we can get the best service possible," said Warren. CEG

Mechanical Irrigation Solutions (MIS), located in Yuba City, Calif., (the heart of production of peaches, plums and pistachios in the United States), was established in 2009 by Jas Thiara, a second-generation farmer.

Tarrant County, the third largest county in Texas and the 15th biggest in the country, has a population of more than 2 million and is split into four precincts.