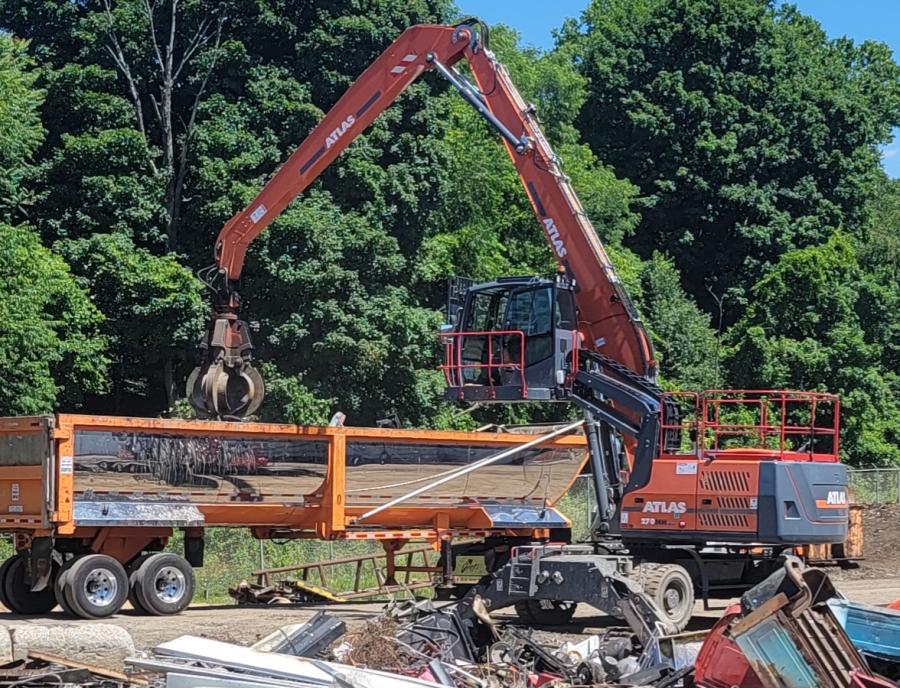 "Atlas material handlers are a new product line for CRW," said Chris Palmer, president. "It was a natural extension of the combination of our excavating equipment division and our crane and lifting division. They are long reach material handling machines that are critical to keep up and running daily for end users, which include the scrap and recycling industry."

He noted that swapping out with a replacement machine is often not an option when a machine goes down. 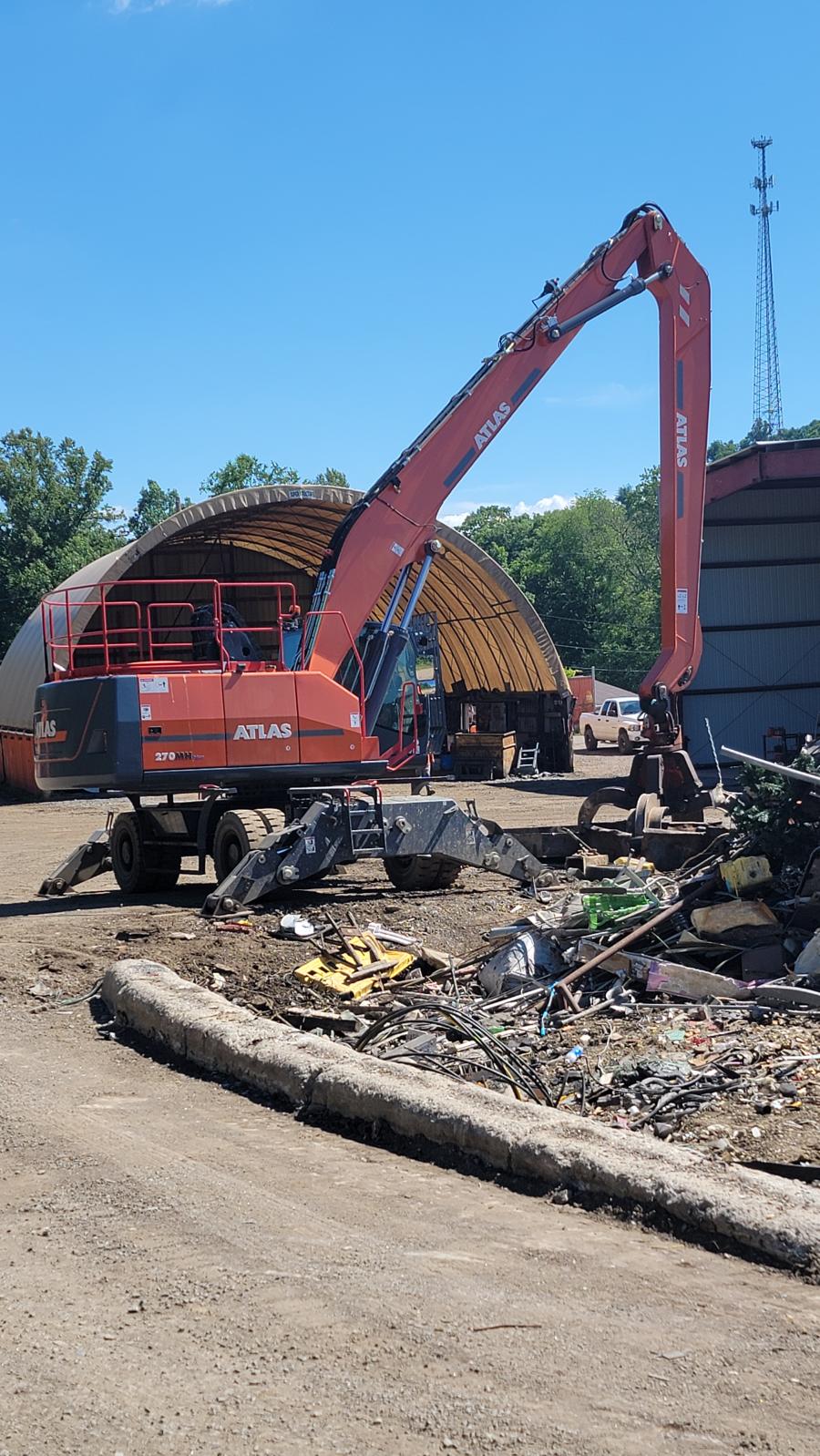 "We did our research on the quality of the product, the support structure in place for parts and service and the availability of technical training for our staff," Palmer said. "That combined with a number of other very strong distributors here in the states made us feel very comfortable that it was a great addition to our equipment solutions offerings."

He added that while the scrap and recycling industry is not new to CRW's Vermont branch, it is new for the New York and Pennsylvania branches where they are the authorized distributor of Atlas.

"Our team there has embraced the new line," Palmer said.

He said that they were thrilled when the opportunity popped up to demonstrate the new Atlas 270 MH to Jack's Recycling.

"Rick Smith at Jack's Recycling has a great reputation for running a very clean operation in the tough, dirty business of recycling," Palmer said. "The two-day demo went very well. Rick has stated that his operator loved the machine and we were able to structure a deal with warranty and financing that met his needs."

"Most of the stuff that it loads is loose stuff like say refrigerators and freezers and just loose sheet metal that would come off cars and stuff," he said. "We average about 35 tractor trailer loads a week of material going out."

"We had another machine that just simply wasn't doing the job," Smith said.

He called the salesman he bought that machine from and mentioned that he might be buying another piece of equipment, and he suggested looking into Atlas.

"We looked at them [Atlas material handlers] and I had just seen pictures on the Internet of them," Smith said. "I called a couple guys around that had them and they were real impressed with them. The rest of my equipment in the yard is Doosans and then I have a front-end loader. After that I went, you know, we're just going to try this and see what happens. And so far, we've not had one ounce of problems with it. The boy that runs the machine likes it real well."

The sales experience also was a good one for Smith, who had never worked with Wood's CRW before.

"They are really, really nice people to work with and the owner, Chris [Palmer], actually came down and we went to dinner after we had bought the machine and he is a really nice guy," Smith said. "They're all real personable. Our salesman, Rob [Reed], came down and did just a great job presenting the machine and when they were here going over the machine, they were more than helpful. If we didn't understand something, they took the time to show us what to do and what not to do. They are from Carlisle and they were the closest Atlas dealer to us."

Smith said he would 100 percent recommend CRW to other people, and he actually already has.

"The machines are leased," he said. "We lease them every three years, so whenever this machine is up, we'll probably just go ahead and lease another one from them with no problem at all."

Rob Reed, territory manager of CRW for more than two years, said that the company started with the Atlas line in fall of 2021.

"As a dealer, you are always looking for additional product lines that are innovative and that will complement your other core products," he said.

When Smith was looking to replace his previous machine, Reed talked to him about the machines that would best fit his needs, ultimately deciding on the Atlas 270 MH.

"We set up a demo and finalized the deal," Reed said.

"I am 58 years old and I've never had a job yet," Smith said. "I've been here ever since I was born. My dad [Jack Smith] actually started the business and we used to sell used auto parts here and then Dad passed away in the year 2000 and I decided that I was going to do some things differently. Then in 2006, we opened up the recycling business."

Smith's wife, Crystal, works as the bookkeeper. They have been married for 20 years and she is a nurse.

"My wife plays a real big part here in the business and without her it just wouldn't be the same," he said.

Smith added that the business used to rely on other people to haul its material out, but now the business has six trucks that run the roads every day to pick up miscellaneous scrap and cars. They also deliver to steel mills and other companies. They pick up within a 200-mi. radius and deliver within about a 100-mi. radius.

"We pretty much buy every type of metal that there is," he said. "I don't buy any precious metals. We just buy iron and mostly cars and the non-ferrous like copper and brass and aluminum."

Smith said that business is booming, especially with all the cleaning up that happened during COVID.

"We have 10 employees and the last time I actually hired somebody was 12 years ago," he said. "So, it's a very lucrative business."

Smith describes himself as a "clean freak" and said that people ask him how he keeps his trucks so clean. All of the trucks are the same … Kenworths painted in orange, white and black.

He said his game plan is to retire in 12 months.

"I've been telling my wife that whenever I turn 60, I'm really going to try to sell the business, because I want to quit," he said. "Not because I have to, but there's other things that I want to do in life. I don't want to be one of the guys sitting at home with a wheelchair or a cane or whatever saying boy, you know I wish I'd have done this or done that. I want to go see things."

Eagle Crusher Co. , a manufacturer in the crushing and screening industry, continues its tradition of new product innovation leading into 2023.