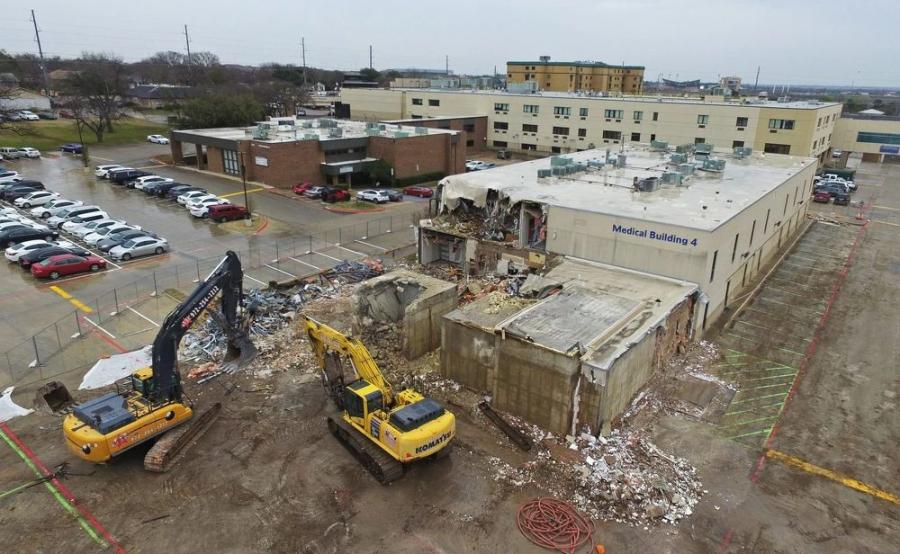 The rectangular-shaped five-story structure (no basement) had a two-story wing and other smaller structures on the north side. 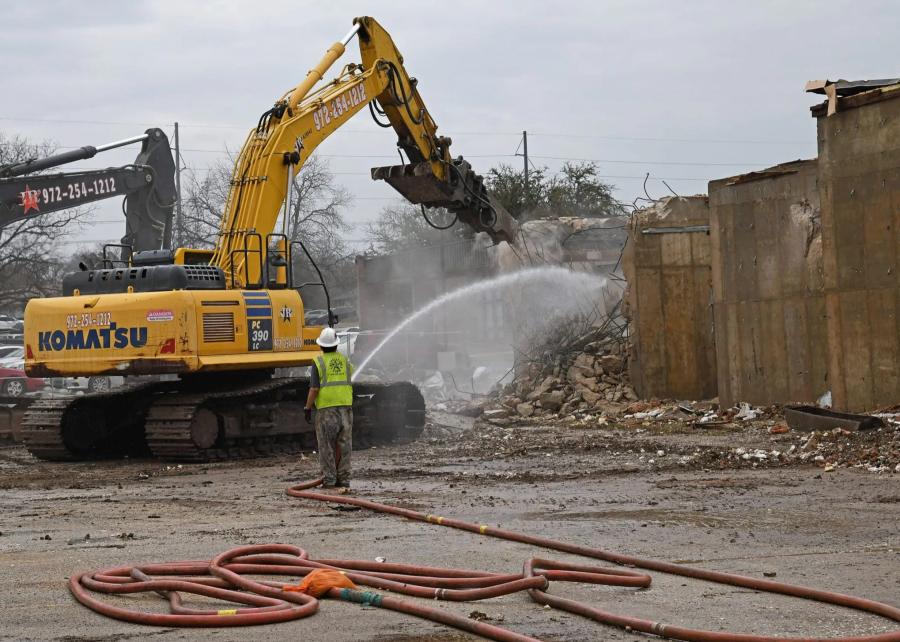 "We pulled it down and cleaned it up in four months," said Bobby Lindamood Jr., the owner of JR Demolition and Excavating Inc. "It was a pretty good-sized hospital."

Taking down the wing and subsidiary structures was executed in 14 days and no challenges were encountered. Once this section was cleaned and the materials were sorted and shipped out, efforts could begin on the main building.

The first step was to remove the brick. The ground floor was based on concrete, while the structure for the upper floors was based on steel I-beams.

"We knew that the building was stable without the brick, and we started from the east end, first removing the steel I sections," said Lindamood Jr. "I've been doing this since I was a kid. My dad owned a different company similar to what I do now. When we walk into a building, we see what it is made of – concrete or metal, how the brick is tabbed, and what kind of structure is on the bottom – is concrete, metal and piered? We know what to do and we know its stability – whether it is going to be a quick pull or we have to push on it."

Recycling is a key trademark of the company and for the hospital project, 90 percent of the materials were recycled.

"What takes the most time is that we are environmentally sensitive — we want to make sure that we recycle everything we can," said Lindamood Jr. "We take the time to pull the wire and the pipe, not only are they precious metals, but when you pull a big structure down on top of the metals, it's hard to get them out. We have a process where we have ground crews, in full safety gear, with a two-inch hose to keep the dust down. After we pull off the brick, we separate the metals and wood, and then place them in specific piles."

The I-beam and shreddables were cut from the main beams and were segregated rapidly. With metal upper structure removed, the demolition of the ground floor could begin and this area was separated into 12 sections, with the final one being the elevator section at the western end.

The repetitive steps for the steel removal and the demolition of the concrete ground floor were beneficial for the crews.

"As you start on the first sections, you learn what the building is going to do and the stability," said Lindamood Jr. "We take our time, making sure that the metals and other materials go into the right piles. We have another crew with trackhoes that sift and separate the metals to load them into trucks and make sure that we get the maximum value for them. We're really good at it – a lot of people like us because of our recycling emphasis. 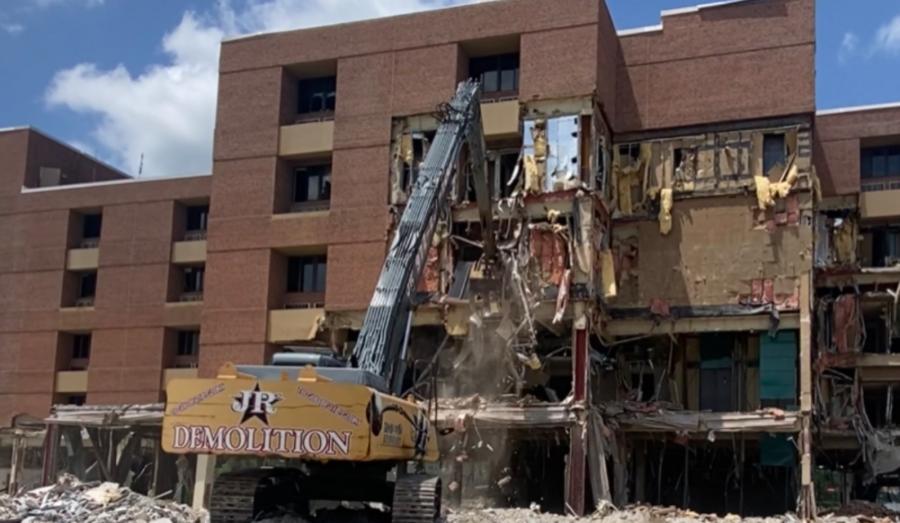 "There's a lot of companies out there that will just crush a building and then try to separate it, or they will demo and mix concrete, trash and metal and send it to a landfill," he added. "We don't do that. We are experienced in separation and we are very experienced in working in tight situations. We've demolished homes that are in some pretty tight lot lines."

After removing the first 11 sections, it was time to tackle the elevator section.

"It was fairly easy," said Lindamood Jr. "We have a crusher cutters at the end of our John Deere 75-foot 350 high reach and we just worked down, crushing the walls from the top. When it became unstable, we shoved it over and it fell down by itself. It i took about 10 hours in total to bring this section down."

With concrete turned into rubble, crews rapidly cleared the site.

"Due to our planning and processes, if it rains, we are on top of things and continue to haul concrete and other materials even if it's a little wet outside. It's all about efficiency," said Lindamood Jr.

Before JR crews could begin their work, a firm was brought in to conduct the asbestos abatement operation, which took about three months and was finished by February. Once that was done, JR's personnel salvaged the copper and aluminum from within the building, which took about 3.5 weeks. The actual demolition was completed in three months using a variety of heavy equipment via daytime operations that went from 6:30 a.m. to about 5:30 p.m. 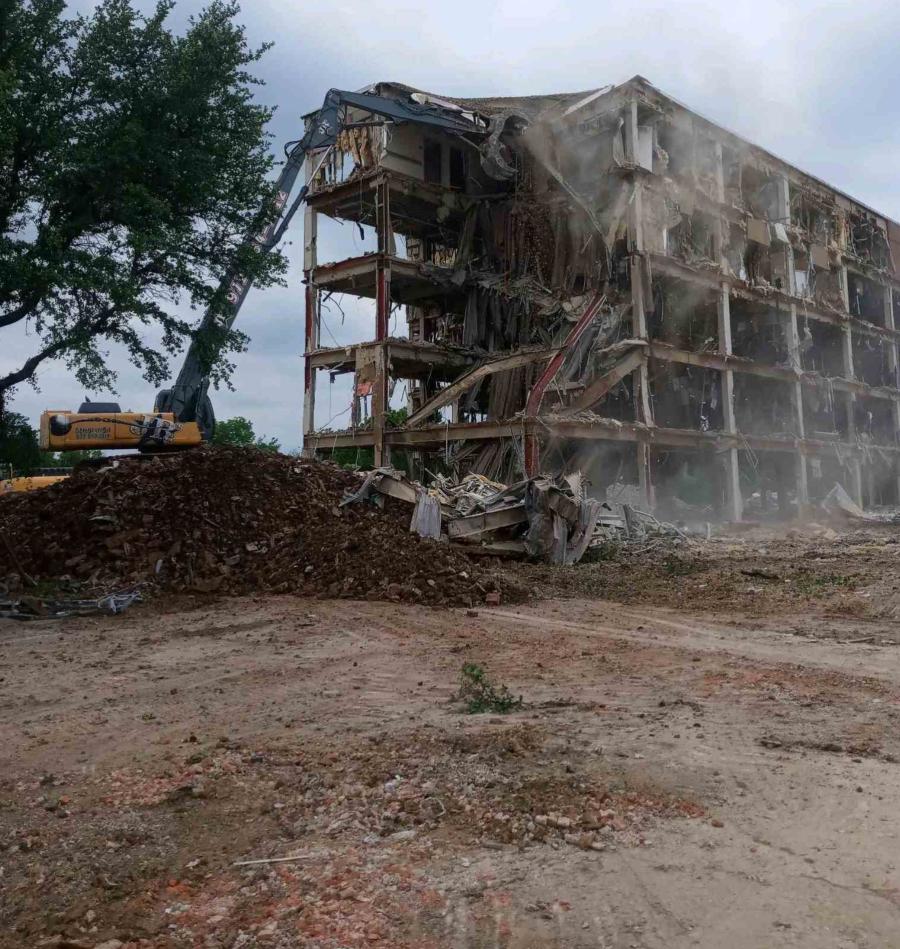 As the asbestos abatement was ongoing, JR's Demolition applied for the 10-day notification with the state to proceed with the demolition.

The brick was crushed by the recycler and used as a material for road construction, as was the concrete. The brick used for the hospital could not be re-used for other building projects because of the type of brick that was used.

"We have been awarded back a lot of money and awards from Texas Mutual," said Lindamood Jr. "They recognize our safety record and pay some of the money back that we paid in."

The management team included Billy and Andrew Commianto, who served as the day-to-day project leaders, and Jason Caballero, who managed the trucking operations.

"Each team had a division leader," said Lindamood Jr. "Billy oversaw the whole job, Andrew was the equipment manager, and Jason ran all of the trucks — he assigned everybody, telling them what they had to do and where they were going. The guys are long-term employees the company. Their attitude is always upbeat. We treat them like family. I remember what it was like to be on the ground whenever I worked for my dad."

The company's shop is centrally located in Irving and its three mechanics can reach sites in Dallas and Fort Worth within 20 minutes. The chief mechanic is Kevin Lemerand, who oversees shop operations, along with James Rich and Tommy Snipes, who will soon be with the firm full-time.

"The main wear and tear was hydraulic lines that blow," said Lindamood Jr. "Sometimes you have teeth that break off the buckets. Generally we can have those repaired within a couple of hours. Our mechanics do great work. We have four to five good crews out at the same time depending on the size of the jobs."

JR purchases and rents equipment from RDO Equipment in Irving, as well as other regional dealerships.

"I buy from all over," said Lindamood Jr., whose company owns all equipment from heavy pieces of iron, trailer trucks, to pick-up trucks. "A lot of it is stuff that I see online. I've known equipment all my life, so I can tell you what's wrong with it and what needs to be fixed – the whole nine yards."

"We pretty much do everything else, unless it is a deep motor or something like that," said Lindamood Jr. "We're pretty skilled here." 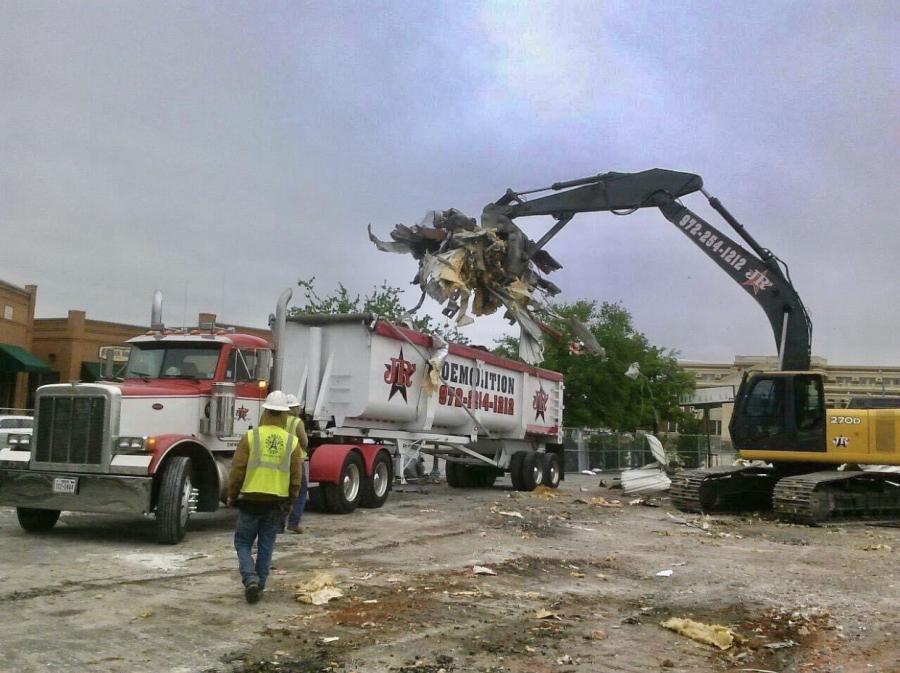 Good relationships with dealerships are crucial for Lindamood Jr.

"I've been in this industry all of my life and most of the places I frequent to they've known me since I was kid. It's fun to go in and still see old friends. They take really good care of us because they know we are very loyal. We have a good working relationship with the people who help us."

Although Heavyquip in Irving does not sell equipment, it does provide parts and services.

JR works clean, fast and is recognized for its speed and determination to complete the job perfectly.

"There are times where project are on hold because somebody was not able to pull the gas and electrical lines fast enough or separate the water pipe," said Lindamood Jr. "Those are our biggest hiccups. Once the utilities and asbestos are out of the way, we are pre-planned and ready to go. As a matter-of-fact, when the asbestos crew is in, we already file our 10-day application so that when they are through, we are right behind them. We have a reputation of being quick, so they have to be out of our way. We do our job, we don't jack around. We roll in – we're there to make money and satisfy our customers."

The site and adjacent properties, owned by a private developer, may be converted into a fuel station, along with a car dealership and other commercial buildings. At its council meeting last fall, the city approved a zoning change for the hospital and adjacent 11.47 acres to permit commercial development.

"There are no firm development plans for this area," Matt Moore of Claymoore Engineering on behalf of the applicant, told the local media, which noted that "The intention was to clean the zoning up in case anything does move forward. Director of Planning Jennifer Arnold said she believed it is possible the hospital building would be demolished to make room for some of the new possible uses, such as retail, restaurant, a movie theater, hotel or motel."

The hospital was located at 130 S. Central Expressway and the Virginia Parkway. Since its closure, the services it provided were transferred to 4500 Medical Center Drive as part of Medical City McKinney's new behavioral health and rehabilitation services pavilion. CEG