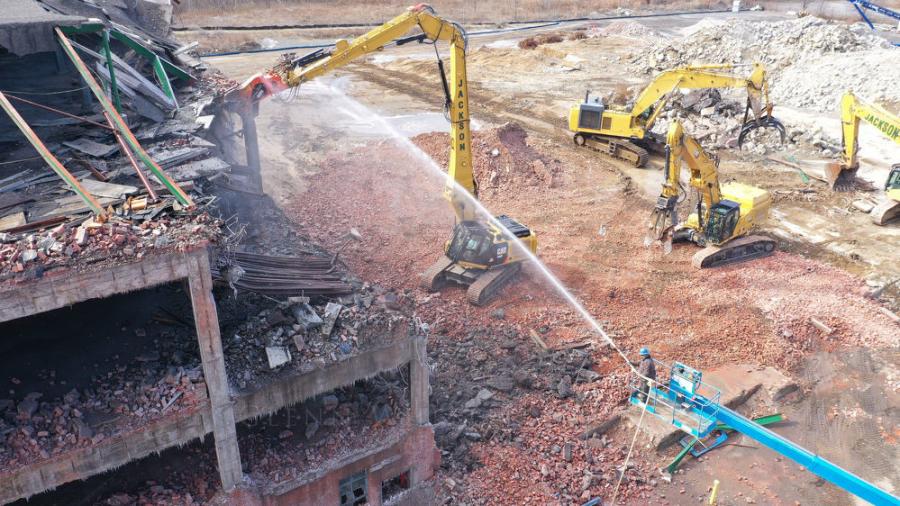 The plant was located on a 30-acre site, which had 10 buildings on 10 acres. (Jackson Demolition Service Inc. photo)

The plant was located on a 30-acre site, which had 10 buildings on 10 acres. The plant itself was rectangular shaped, with up to four stories in some sections, along with some basement areas, and 10 garage buildings. The structures occupied roughly 500,000-sq.-ft. 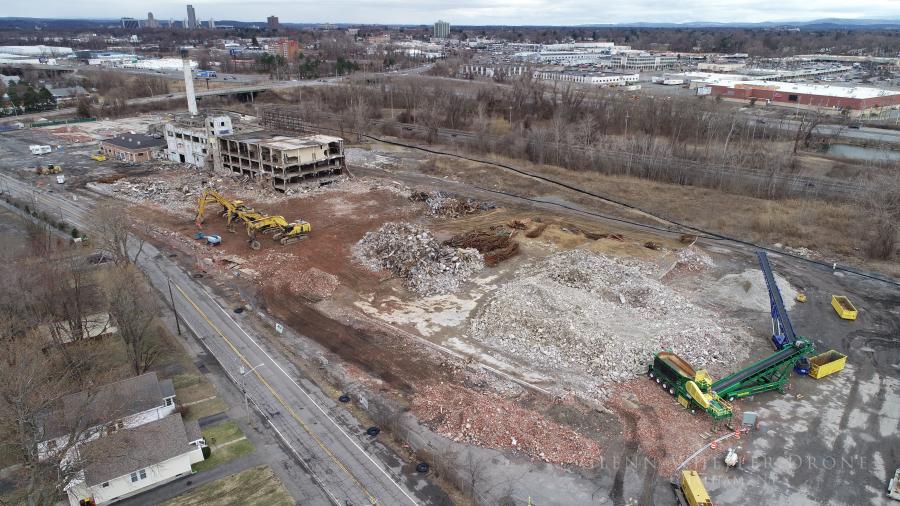 The property was purchased by Richbell Capital, which is looking to construct residential and commercial structures on the site.

"The main facility was one building that had several additions over the years," said Josh Frederick, Jackson Demolition's executive vice president. "It was built with concrete columns and cast-in-place concrete decks. The majority of the exterior walls were covered by brick, with some cast-in-place walls. Almost everything was concrete."

Prior to the demolition of the main building, which began last summer, a six-month asbestos abatement operation was conducted by a subcontractor. This period also was used to demolish the outer structures and to turn off of the gas, water, electricity and other utilities. The garages also were constructed with concrete and had brick or concrete exteriors.

At this point, most of the main building has been taken down.

"Mostly all of the brick and concrete is staying on site," said Frederick. "It is being crushed to use as fill and will be placed in the basement level. We are doing the recycling, which is why the demolition duration is longer than you would normally see because we are processing the material."

The benefit for the company is that the material does not have to be transported off site to recycling facilities.

The asbestos abatement operation had nearly 20 people on site, while the demolition operations for the main structures had eight people.

This is definitely an equipment-driven operation and excavators are playing a key role. Crews are using a Cat 340 high reach, a Cat 352, a Cat 336 with a grapple, a Cat 336 with a concrete pulverizer, a Cat 365 with a bucket, and a Komatsu 1250 with a grapple that took down most of the plant. A Cat 973 track loader is being used to move materials for processing, which has the brick and concrete crushed by a Lippmann 3062 jaw crusher.

"One of the things that is cool about this job from a demolition equipment standpoint is some of the specialty pieces we had," said Frederick. "We had an ultra high reach excavator that was 75 feet in the air. Our Cat 352 had a third member UP 45 on it and it allowed us to cut those two- or three-foot concrete columns like a pair of scissors. Our high reach had a multi-processor with a concrete jaw that allowed us to chew up apart all the elevated concrete decks.

"We had some pretty neat equipment," he added. "Unless you know it, it's kind of hard to picture that. Equipment is the key to do any project like this — it's having the right people and equipment in place. From a demolition standpoint, this project is pretty straight-forward, but there is just a lot of material and ground to cover. With the right tools, we made short work of it."

The demolition is taking time, but it is being done right.

"We cut the job into two phases so we could expedite the demolition," said Frederick. "We started demolishing a portion of the building last year [2021] that took a couple of months and then we went on a hiatus over the winter while we finished all the environmental work on the next portion of the building. It allowed us to get some work done despite the constraints. It looks like we have been there for years. 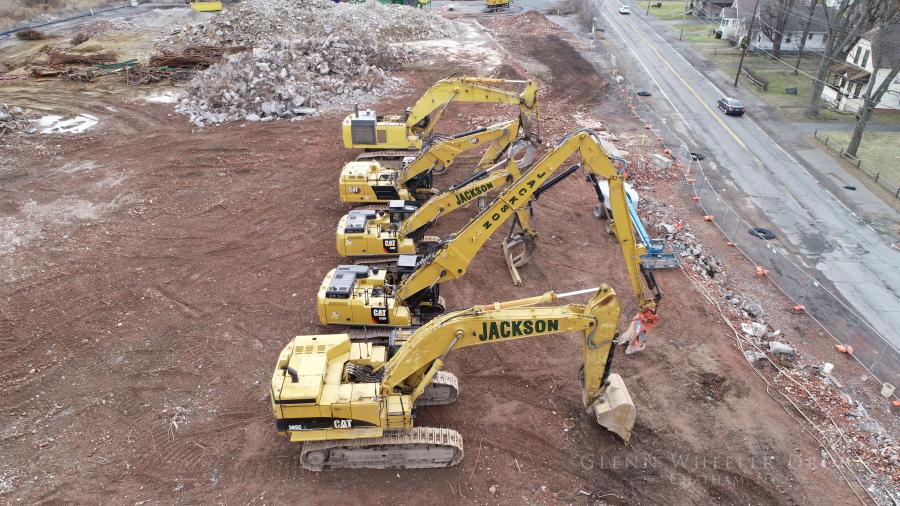 "We took down a third of the building last summer," he added. "We started up at the end of February and the vast majority of the structure is down. We're just processing the material at this point. The portion that we did this year was a little harder because of the height — three or four stories, and we also had basements to deal with. We took down a section, collapsed the basement and kept moving."

The collapsed basement areas served as pads for the heavy equipment.

"Once all the demolition is done," said Frederick, "we have to remove all the material in the basement areas and process it and eventually put it back as fill. We are handling this material four times."

When a section of the building is razed, excavators go through the area and remove the majority of the rebar.

"The material is then processed down to the size where it can go through the crusher — you basically push up the pile into the loader and bring it to the crusher," said Frederick.

Dust from the operations is kept under control via the use of a hose that pours water onto sections that have been torn down.

"If we are working on an elevated section of the building, we had a man up in a lift spraying in the direction of where we are working," said Frederick. "Our client is doing perimeter dust monitoring throughout the project."

Frederick praised the efforts of crew.

"Our guys are great — they work hard every day, are greasing and maintaining the equipment and work effectively," he said. "There is good communication with everyone and the most important thing to them is safety. You can't make mistakes with the equipment and the heavy materials, especially when we have multiple pieces working together."

‘The three of us have been working together for five or six years, and it's a combination of open lines of communication and teamwork," said Frederick. "I manage the project from the office. Jack is field coordinator and deals with the subcontractors, vendors and trucking, and Arnold coordinates the wrecking and movement of materials on-site for processing."

Jackson Demolition is self-performing most of the work. When all is done, the buildings will yield up to 75,000 tons of brick and concrete, along with the rebar.

"It's a lot of material," said Federick.

The Albany project is very close to Jackson Demolition's main office, which has lead mechanic Mark Okrasinski visit the work site to effect repairs for the vast majority of the equipment.

"Once in a while you have to call a dealer if a piece of equipment is under warranty or if it's a computer issue that we can't diagnose ourselves," said Frederick. "Our staff is maintaining the equipment throughout the project. Mark is a great guy. He's been with the company for close to 30 years and is a very methodical trouble-shooter — not much gets by him."

Jackson Demolition purchases and rents equipment from dealerships such as Milton CAT, Finke Equipment and others

"Milton CAT has an office in Clifton Park and our sales rep is in Buffalo," said Frederick. "They sell most of our equipment and take care of warranty issues and diagnostics on the computer side of things."

Frederick is impressed by the IT systems on modern equipment, which alert operators and maintenance staff about immediate and long-term problems that have to be addressed. 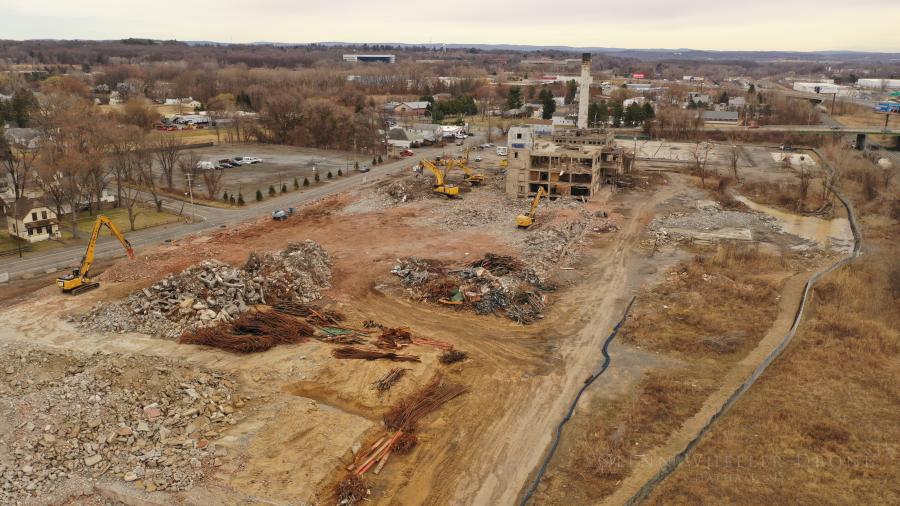 "The equipment that we are using is probably more advanced than the systems in cars and trucks — there are a lot more moving parts and pieces," he said. "We are fortunate with Sandy Jackson, the owner of the company — he prides himself in purchasing newer, modern equipment and so we have all the good tools."

Frederick, who has been with company for eight years, is very open to suggestions from his crews.

"Absolutely," he said. "These are the guys with the most experience, the ones that you rely on every day for updated and accurate information. If they tell me something has to go one way, I trust them and we change our work plan or means and methods to accommodate what they think is right. They're the professionals when it comes to razing buildings. Their suggestions save us time and money every day — that's what makes them the best."

He added that the company demolished many coal-fired power plants and paper mill.

"These are our biggest markets." said Frederick. CEG