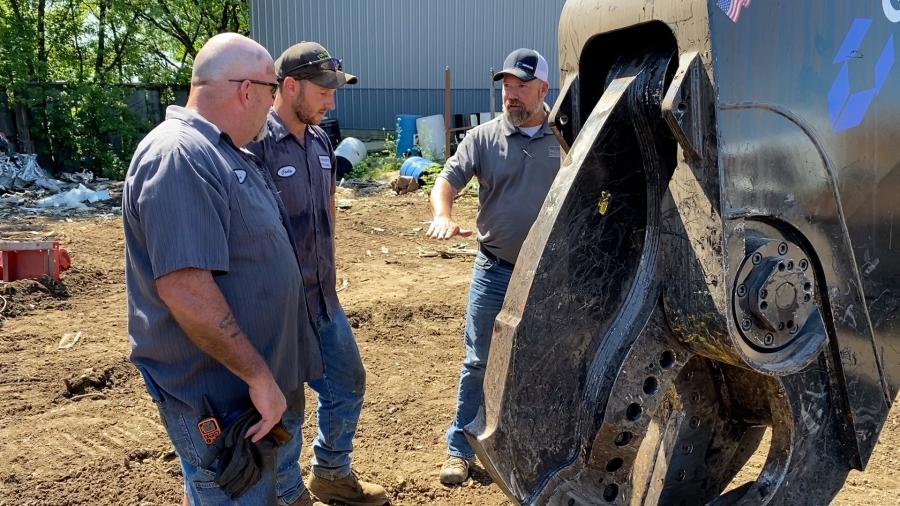 When Dean Tournier and his son, Cody, were looking to boost efficiency at their Independence, Iowa, scrap yard, they didn't realize they were about to break new ground on multiple levels. A year earlier, Genesis Attachments rep, Matt Overdahl, made a stop by the yard to talk about how a new shear attachment could boost productivity.

The Tourniers weren't ready to make a purchase at that time, but they were intrigued. After some research and number-crunching, Cody, vice president of Tourniers, called him back, ready to buy. The timing couldn't have been more opportune for new Road Machinery & Supplies Co. Territory Manager Joel Werthmann.

The process ended with Tournier's Recycling purchasing a new Genesis GXT 555R mobile shear and a Komatsu PC290LC excavator. The package was a first on many levels. It was the first Komatsu excavator the company had purchased; the first shear it had ever used; the first time Tournier's Recycling — a fourth generation north-central Iowa company — had purchased from RMS; and it was Werthmann's first sale as territory manager.

"It's kind of crazy how it all worked out," said Werthmann. "To be able to sell to a first-time customer and really show them what we can do, and earn their trust and respect was awesome."

"Working with RMS was great," said Dean, who is president of the company. "We had no issues, and they were always there for us throughout the process. We had a minor issue at the beginning with the excavator, and RMS was here right away and got it fixed as soon as the part came in."

What makes the number of firsts even better is that the equipment has produced in the yard.

"We used to cut the scrap by hand with torches," said Cody. "We couldn't keep up. We figured adding the Komatsu and shear would help us save on time and workforce. With the shear and excavator, we can do the work of three to four guys at once.

"We have a significant pile in our yard now," he continued. "It will probably take me two weeks to cut it all down with the shear. Before, it would have taken three guys cutting by hand four months to do it."

"We sheared a hay bailer the other day in 35 minutes. Normally, that would have taken six hours to cut it down to three-foot pieces," said Dean.

"The excavator and shear have met and exceeded my expectations," he added. "I'm still getting used to it, but it has definitely sped the process up."

Though it has taken four generations for the Tourniers to turn to RMS, it is safe to say the next call will come significantly sooner.

"The next piece of equipment we buy, RMS will be the first people we call. Guaranteed," said Dean.