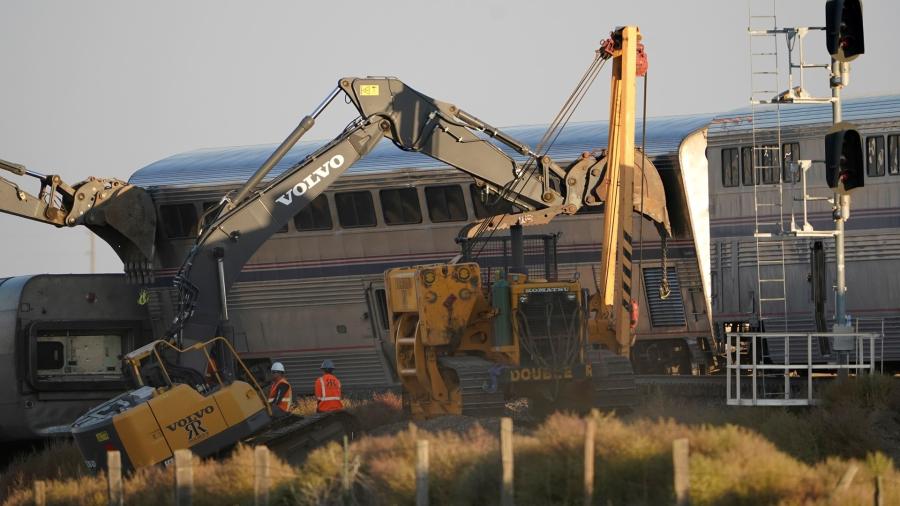 With the help of Volvo, John Deere and Komatsu excavators, emergency responders were able to remove the train cars and other debris caused by the accident.

Volunteer emergency responders, firefighters, law enforcement, medical providers, contractor crews and regular citizens all worked together to help those whose trip was so suddenly and violently interrupted by the derailment of an Amtrak train on Sept. 25 in Montana.

With the help of Volvo, John Deere and Komatsu excavators, emergency responders were able to remove the train cars and other debris caused by the accident.

Investigators do not know the cause of the accident, but they are studying video from the train and another locomotive that went over the same track a little over an hour earlier, National Transportation Safety Board Vice Chairman Bruce Landsberg said.

Sometimes rail lines can become deformed by heat, creating buckles in the tracks known as sun kinks, according to officials. That was the cause of a derailment in northern Montana in August 1988, when an Empire Builder train veered off the tracks about 170 mi. east in the tiny town of Saco. The NTSB concluded that an inspection failed to catch a problem in the track, and officials did not warn trains to slow down on that stretch. The crew saw the track had shifted, but the train was going full speed and could not stop before derailing. 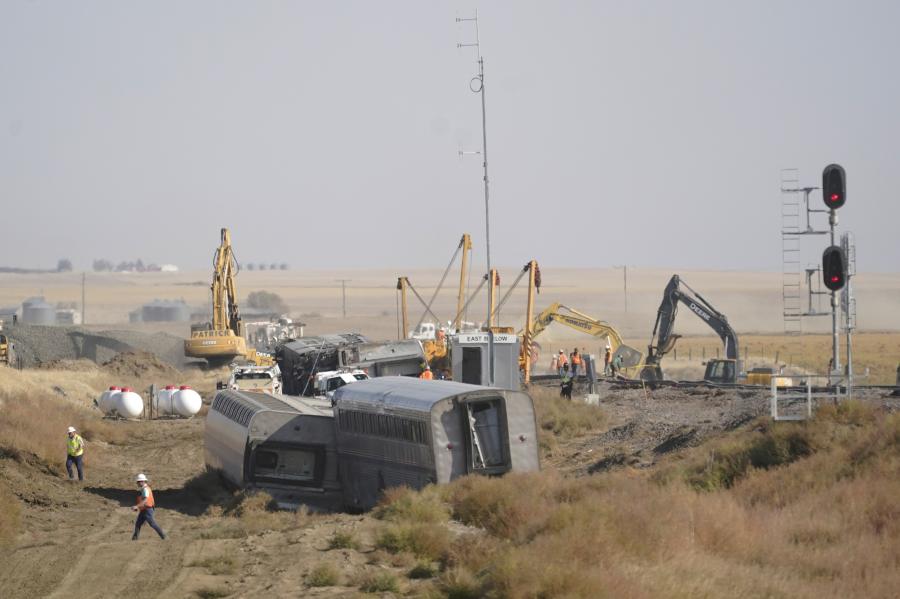 "We have experts that are studying the camera footage frame by frame to make sure that we see exactly what the engineer saw — or maybe didn't see," Landsberg said.

The train derailed before a switch in the line, where one set of tracks turned into two, on a stretch of track that had been inspected just two days before, he said.

The westbound Empire Builder was traveling from Chicago to Seattle when it left the tracks near Joplin, a town of about 200. The train, carrying 141 passengers and 16 crew members, had two locomotives and 10 cars, eight of which derailed, with some tipping onto their sides.

Trevor Fossen, a farmer who just so happened to be on the scene at the time, stopped to help local crews.

Fossen and at least nine other people called 911, setting off a chain reaction of help from residents in the nearby towns of Joplin and Chester as people jumped into action to get people off the train and care for injured passengers and those who were stunned and had suffered bumps, bruises and other less serious injuries.

Sarah Robbin, the Disaster and Emergency Services coordinator, said the response across the Hi-Line was "fantastic."

"We can't thank our partners enough, who came from everywhere and did what they needed to do, and it's just going to be one of those things that I don't know that we'll ever be able to repay, but know that when they put out the call, we will be there for them," she said.

The derailment was approximately 150 mi. northeast of the capital of Helena and about 30 mi. from the Canadian border. The tracks cut through vast, golden brown wheat fields that were recently harvested and roughly parallel to U.S. Highway 2.

To support customers that want to boost productivity with an advanced drill, Komatsu premiered its newest blasthole drill, the ZR122, at MINExpo 2021.

When Michael Bercowetz approached his father, Donald, about a new role that he wanted to fill in the family business, DMR Materials, it was after several years of observing the materials production and sale industry, how their own business operated and how their competitors' businesses operated.