Lanier Sand and Soil Continues Its Many Decades of Success 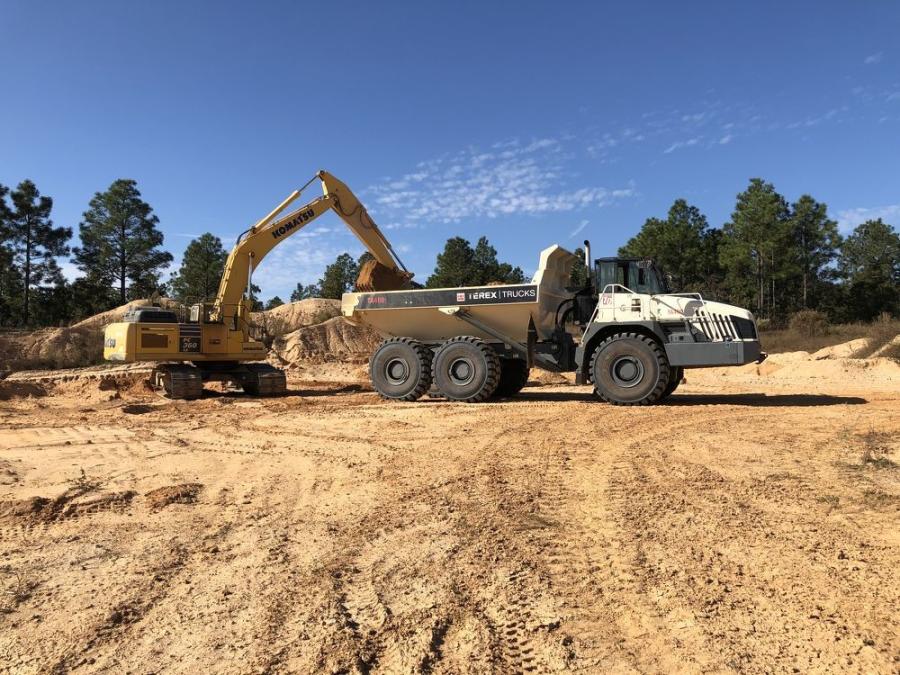 With one Terex truck in its employ, Lanier Sand and Soil is now considering going ahead with plans to get another.

The task ahead for Helen Lanier is to keep the Columbia-area company on its upward path following the death of her husband, Dennis, who took over the business from his father in the 1970s before operating it with Helen since 1996.

Dennis Lanier's passing in May 2020 marked a huge loss not only for his family, but also for the company. Lanier Sand and Soil, however, is in capable hands due to Helen's knowledge of the business, and the fact she has surrounded herself with talented and trustworthy people.

"I had been helping Dennis and then he had a kidney transplant in 1997," she said. "I had been in nursing school, but I was also in sales and marketing for a trucking company. He said, ‘If you come work for me, we can grow this business together.' So, I agreed and helped run the company while he was recovering from his transplant. Thank God I had him to guide and train me a lot."

Lanier Sand and Soil does exactly what its name indicates: it mines sand and soil from open pits before processing and piling the finished products for purchase by contractors for their various project needs. 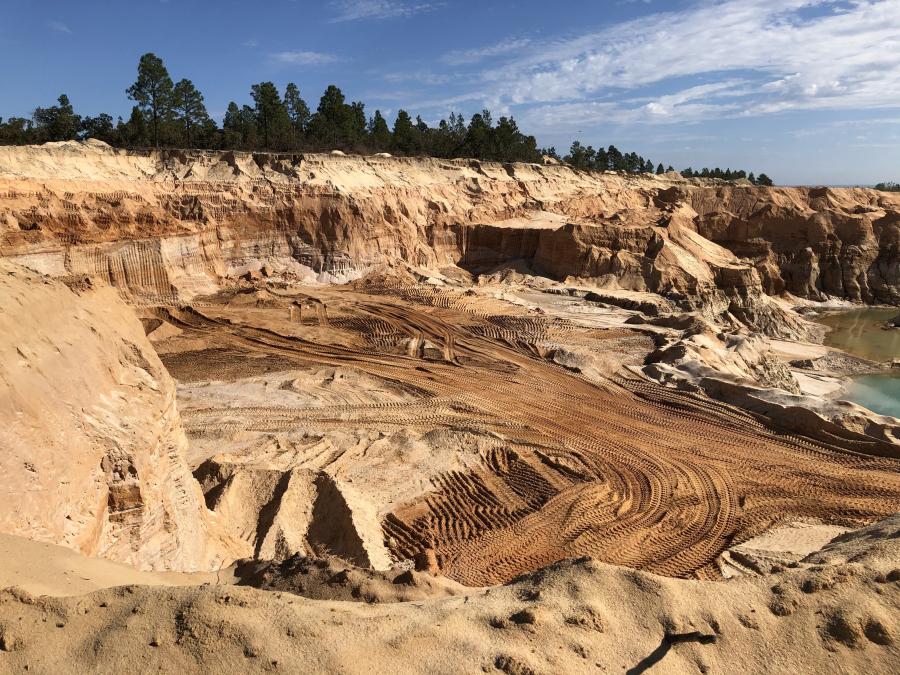 When it was known as Lanier Construction, it focused primarily on its asphalt and concrete businesses until economic forces contributed to Dennis and Helen Lanier selling its concrete division in 2005. When the 2008 recession delivered a hammer-blow to the U.S. economy, they made the decision to sell off the asphalt business as well.

That afforded them the opportunity to develop the sand plant that now allows Lanier Sand and Soil to mine and wash sand for concrete and asphalt companies that use the various-sized materials for use in roadbuilding, dam construction and an array of other applications.

Helen Lanier added that her company's sand is distinctive for its granular makeup, which is quartz based, along with the shape of the sand. The hardness of the minute grains, she said, makes for very strong concrete.

The roots of Lanier Sand and Soil go back to Millen, Ga., in 1953 when Helen's father-in-law, Marvin Lanier, began hauling aggregate sand and soil products. In 1961, he formed Lanier Construction to provide concrete, construction and paving for roads, highways, interstates, in addition to earthwork for other projects. 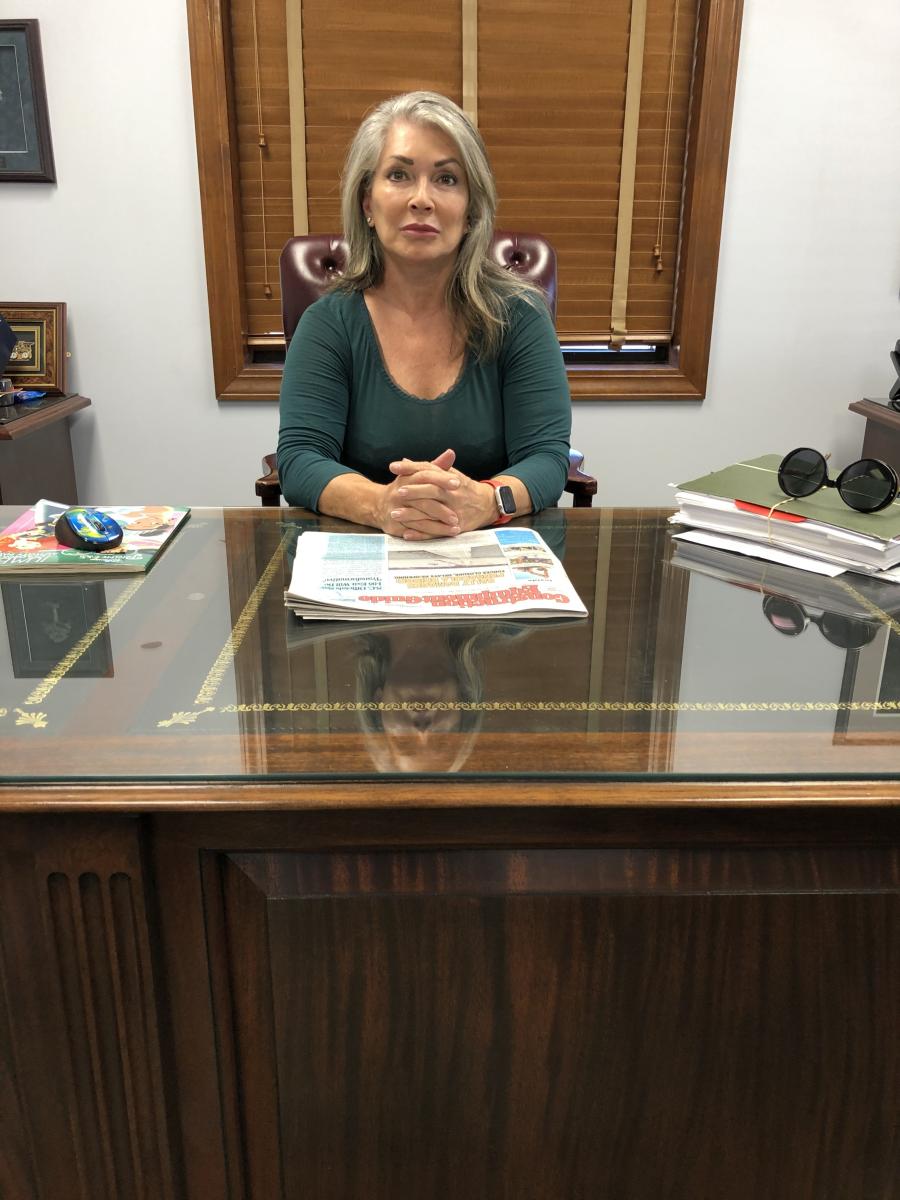 Marvin, according to his daughter-in-law, was a "very smart businessman" who recognized Columbia as a town that was quickly developing, leading him to move his company to the South Carolina capital city.

He created an asphalt division to complement his aggregate business due to the fact, he believed, there were so few asphalt companies in the Midlands that were performing quality work, Helen said.

In the 1970s, though, Marvin suffered a massive heart attack and his son, Dennis, only 17 years old and working at his own business in Georgia, was asked by his father to help run the family business in his absence. During the elder Lanier's recuperation, Dennis gained invaluable experience operating a growing firm and he remained side by side with Marvin upon his return to work. When Marvin died in 1992, Dennis took over running the company.

Helen said under her husband's stewardship of Lanier Construction, the company grew three times the size it was from when his father owned it.

"Dennis was a dreamer," she said. "He loved the business and wanted the company to be the biggest and the best. Because of him, Lanier became one of the three largest construction companies in the area at the time."

Lanier Sand and Soil's current property and mines were acquired in the late 1970s as a result of the strong friendship Marvin Lanier had with Jennings Stroud, the owner of the land and pits at the time, according to Helen Lanier. 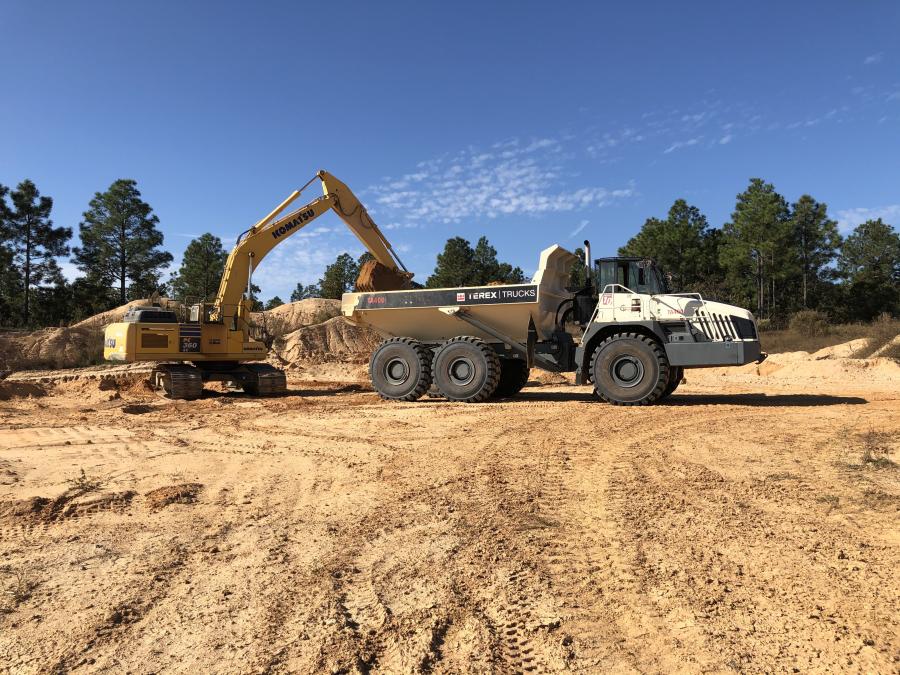 "We were just starting up in the concrete business and we were getting asphalt sand from down here in our lower pit when Mr. Jennings offered another 200-acre tract to Pop [Marvin], who had gone up there to sample the sand. Well, we couldn't afford a tract that large, so Pop bought 35 acres right in the center of the pit and began mining our own sand for the concrete and developing our own product. Today, we lease the other 200 acres from the Stroud family."

Through its customers, Lanier Sand and Soil learned more about their needs and began producing blended and certified products.

"We have several different types of sand that are staged in different areas," she said. "For instance, if someone comes in wanting masonry sand, fill dirt, sand clay or topsoil, we will direct them to that area and then the loader will go over and put it on their truck.

"Concrete sand is our C-33 product, masonry sand is our 101, cow sand is 118, which is used at dairies, schoolyards and, occasionally, at golf courses," she continued. "There are two different plants at Lanier Sand and Soil that filter the sand to remove trash and debris so that it is clean when it goes to the customer."

Helen said her husband was cautious in his approach to purchasing equipment for his construction and mining operations. His thinking was he didn't want to buy a lot of equipment because it could cause him to go broke.

"What he would do was purchase a single piece of equipment and only when he paid off that machine would he buy another," she said. Then, he would use that equipment's production to make payments on another new one. That was just the way he ran the business."

Helen herself made a bold move after taking over for her late husband when she turned to the Columbia branch of Hills Machinery to lease a new and dynamic off-road truck for her company. 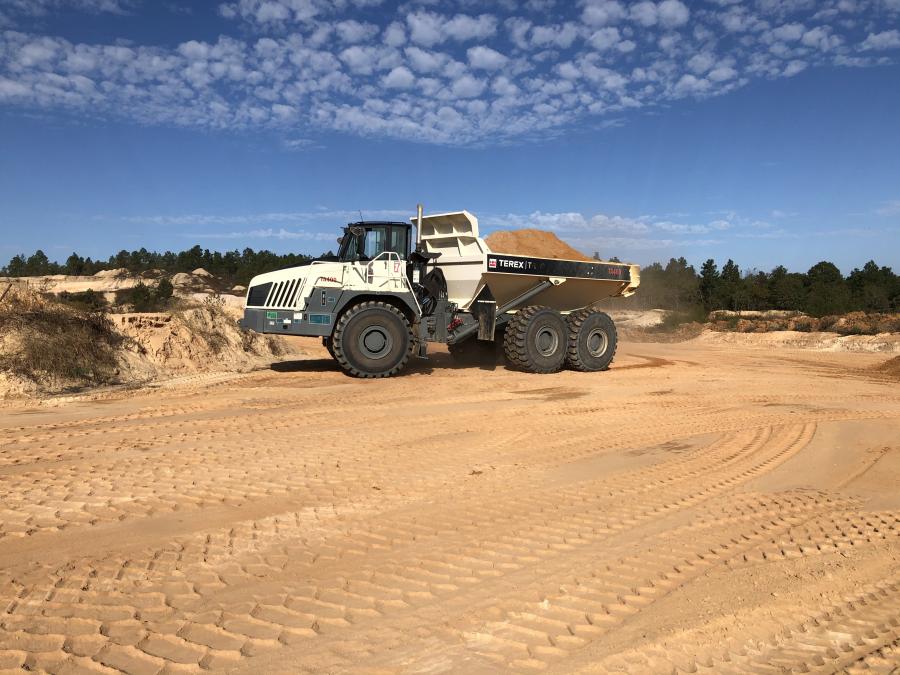 "This past year I was faced with some equipment that was just not performing as it should and I put pencil to paper and talked to Woody Inman [her sales rep at Hills Machinery] before deciding that a lease program, from a tax standpoint, would be great for us and we could certainly put that new piece of equipment to work," she said. "We sold one of our older machines and took that money to put toward the Terex TA400, a 40-ton articulated truck. That has been a great decision for us."

Indeed, the Terex TA400 is a highly productive articulated dump truck perfect for mining, quarrying and construction applications. The manufacturer's off-road artic trucks are recognized and trusted across the world for their reliability, flexibility and performance in the most extreme environments.

Helen is very pleased with the production Lanier Sand and Soil has been getting from the Terex.

"It has performed extremely well; we haven't had any problems with it. Woody and the guys at Hills Machinery have just been super at coming in and servicing it. The blessing is that I don't have to worry about that piece of equipment — these guys take care of it. It has made life for me a lot easier and my mechanic, John Chesler, is thrilled because his job is to keep the plant and the equipment running because that is the key to the whole business.

"So, I think the best decision we made was to lease the Terex because it takes all that off our plate.

With one Terex truck in its employ, Lanier Sand and Soil is now considering going ahead with plans to get another. Chesler was given the OK to make the deal from the proceeds the company gets from the sale of another piece of heavy equipment.

"John told Woody that if we liked the other Terex and it serves us well, we will come back to Hills and lease or buy another," she said. "We're near the point now where we are going to do that."

The Terex TA400 joins other off-road trucks and an excavator in the Lanier pits to extract the sand. After the excavator loads the trucks, they, in turn, haul the sand to the surface and to the plant. From there, wash plant operator Daniel Ward feeds sand into the hopper where the material is cleaned before moving up a conveyor onto a pile.

"In our operation, the pits don't have any water and our products are all clean — that is their greatest value," Helen said. "They have no dirt and obviously have a lot of different types of sand within them. Other area mines may have one, two or three types of sand, whereas we have up to six types because we take some of our waste material, filter and wash them to get the fine material for sandblasting, for use at golf courses, etc."

Despite the loss of Dennis last spring, Helen Lanier is glad she has been able to carry on the legacy that her husband and his father started with Lanier Construction and Lanier Sand and Soil.

"I think Dennis and his father were probably two of the most respected individuals in this business," she said. "I cannot remember all the times the South Carolina Department of Transportation came to them for advice and they didn't send the DOT a bill for that — they just believed they needed to work together. Pop and Dennis built this business — I'm just carrying on what they started and I'm thankful I had a good teacher." CEG

Powerscreen Crushing and Screening, the authorized distributor of compact mobile crushing and screening equipment for Kentucky, Tennessee, Alabama, Mississippi and Indiana, has opened a new facility that encompasses a five-acre site with office, warehouse and workshop facilities in Indianapolis, Ind.

Terex Washing Systems has added the HydroScrub 200 to its Greenline range of products that has been specifically tailored to work in wash recycling applications.

Construction Aggregates 101: What They Are (and Why They Matter) →

Aggregates are often overlooked when we talk about the construction industry today. They are not appealing.

David Simmons started out in 1986 with a front-end loader that he'd use for small lot clearing jobs and various agricultural work.