Pana Limestone Company, founded in 1969 by St. Louis Slag Co., is a quarry operation that produces rock for concrete companies, asphalt and local roads. It was operated by several owners over the years, before being purchased in 2003 by Truman L. Flatt & Sons of Springfield, Ill., a road contractor that was looking for a way to vertically integrate its road company. 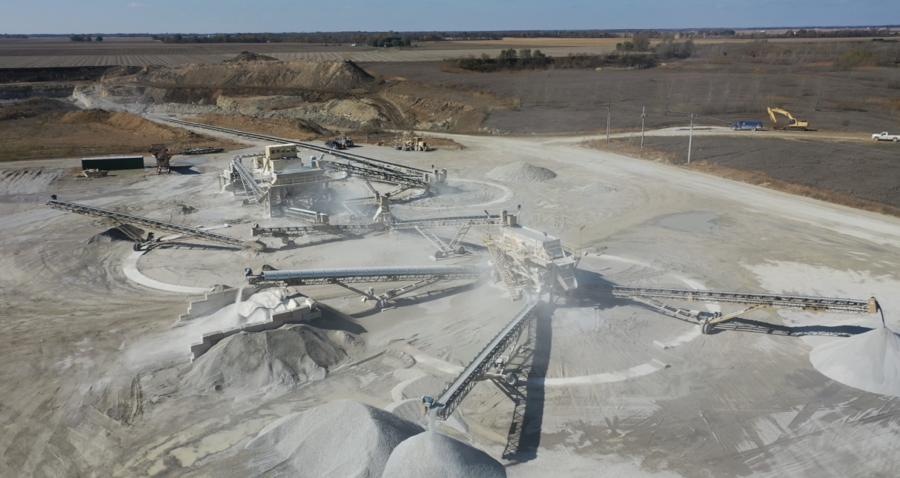 "We primarily are an A-quality quarry, which means that our products here are usable in concrete and asphalt," said Jason Loxley, equipment manager of Truman L. Flatt & Sons. "We primarily try to feed our own companies — a road contracting company with asphalt and concrete plants — but we also service the agricultural industry, townships and others."

According to Terry Engelman, an employee of Pana Limestone Company for 50 years, the quarry was started in 1969 and went into operation in 1970. By 2002, more than 365 acres were mined, with a reserve of approximately 23 million tons. Today, Engelman estimates a reserve of close to 20 million tons.

The quarry itself was founded almost by accident.

"In 1965 or 1966 [companies] were looking for oil and drilled a couple holes. That's when they decided the rock was good in here," said Engelman. "This rock vein that we're sitting on is the Stonington Ridge and it was dumped here by the glaciers. It averages about a mile to a mile and a half wide with a lot of variances in quality of the rock, but it stretches from Nokomis, Ill., and snakes its way up to Stonington, Ill."

In 2018, the company decided to look into ways to cut costs, while still delivering its A-quality product. One of the major expenses within this process is trucking and as the distance from the pit grew, so did the trucking cost. Big off-road trucks are expensive to run, as well as the staff needed to operate and maintain them.

"I was tasked with coming up with a new method for crushing, producing and transporting rock from the pit to a new plant to cut down on trucking costs," said Loxley.

The need to decrease input costs led the company to consider the addition of a crushing and screening plant — making the rock smaller would make it easier to transport.

Once the decision was made, Clyde Robison, vice president of sales of Finkbiner Equipment Company in Peoria, Ill., helped Pana Limestone design a plant that would optimize its operation.

According to Loxley, quarry managers, owners and others participated in researching options to make the best choice for the company. They looked at the very portable all-diesel track machines; all-electric options; semi-stationary machines; and a combination of all. 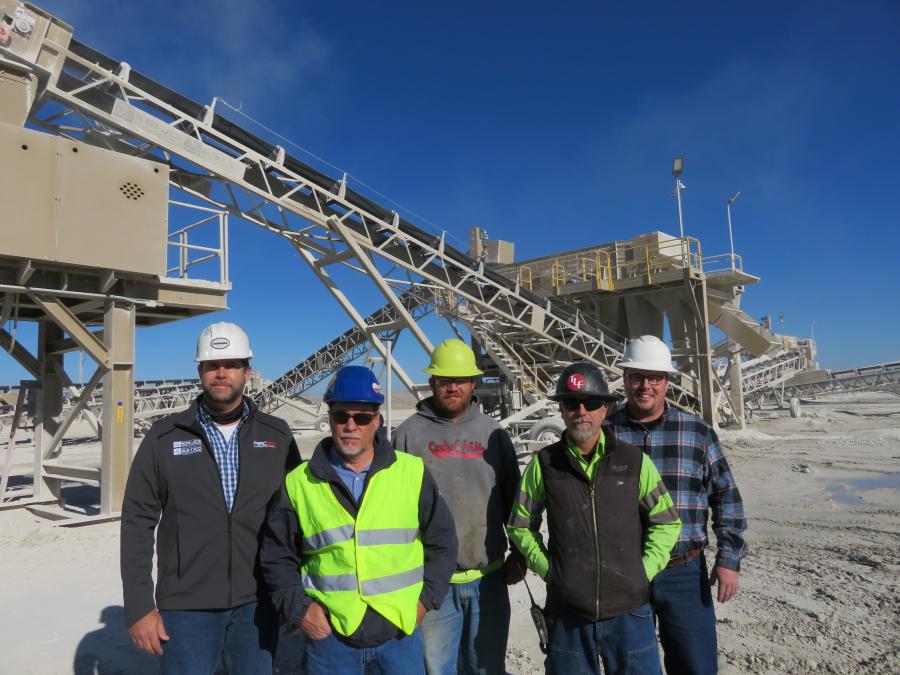 Robison also helped and pointed Loxley in the direction of an Astec KPI-JCI plant that would save on trucking costs by allowing Pana to continue loading with wheel loaders, as it had hoped to do.

"After all the research, we felt the Astec KPI-JCI line sold and serviced by Finkbiner Equipment Company was best-suited," said Loxley. "We already have several large wheel loaders and wanted to continue with that method."

Also important in the decision-making process is that Pana Limestone is an Illinois Department of Transportation certified plant.

Robison and Astec KPI-JCI listened to Loxley's needs and came up with a set up that would work — a whole new plant. A wheel loader feeds the primary mobile crusher, located within the quarry. After the shot rock is loaded into the primary and crushed, it is transported via a 1,000-ft. overland conveyor to the semi portable plant where it is screened with an option to make surge rock, then sent to a secondary impact crusher for resizing. From the secondary crusher, the material is sent to the finishing screen, which makes all the core products required to feed the company's concrete and asphalt plants, along with road base and Ag lime. Provisions also were incorporated within the new build to allow for future specification products to be produced if needed. 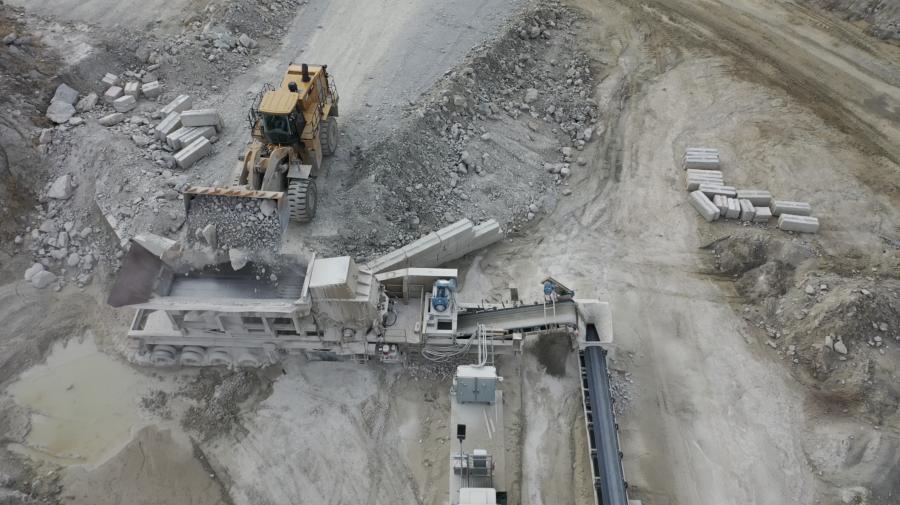 "A primary difference between what we were doing in the past with our rock production and what we've done with this new KPI-JCI plant is we have brought the primary crusher to the pit, we're feeding it with an end loader and we have eliminated all the trucking from the pit to the plant," said Loxley. "This primary crusher is a KPI-JCI 5054 mounted on a mobile chassis that allows us to move it as we progress through our property. We can move this and transfer land conveyors."

Loxley can see the savings already.

"This new KPI plant requires zero trucking. By having this plant, we also have reduced our trucking to the old plant by 40 percent," he said. "We're now using a large load and carry wheel loader working in a short cycle at the pit to maximize feed to the crusher. You can imagine the savings we have from that."

Once everything was ordered and all the drawings were approved for the site, the equipment was delivered to Pana — requiring approximately 26 truck loads.

"I was tasked by the owner of our company to assemble the plant," said Loxley. "We did not hire an outside company — we did it with our own personnel. We did it with people who are experienced in the aggregate business, but maybe not experienced with erecting a plant. The drawings and the help we received from Finkbiner and KPI-JCI was phenomenal. Any time that we had a question, they were approachable by phone calls and emails. We sent several pictures back and forth. When we needed something, things were resolved. During the assembly process, I never lost a single day of work because we were missing parts or couldn't figure out how something went together, potentially leaving us at a stopping point which may have required sending someone home. It couldn't have gone together better."

The wheel-mounted Horizontal Shaft Impactor plant is comprised of:

Pana has found many advantages of the new plant, including its ability to make surge rock. This rock can then be trucked to the old plant at a much lower cost than it was being done before. 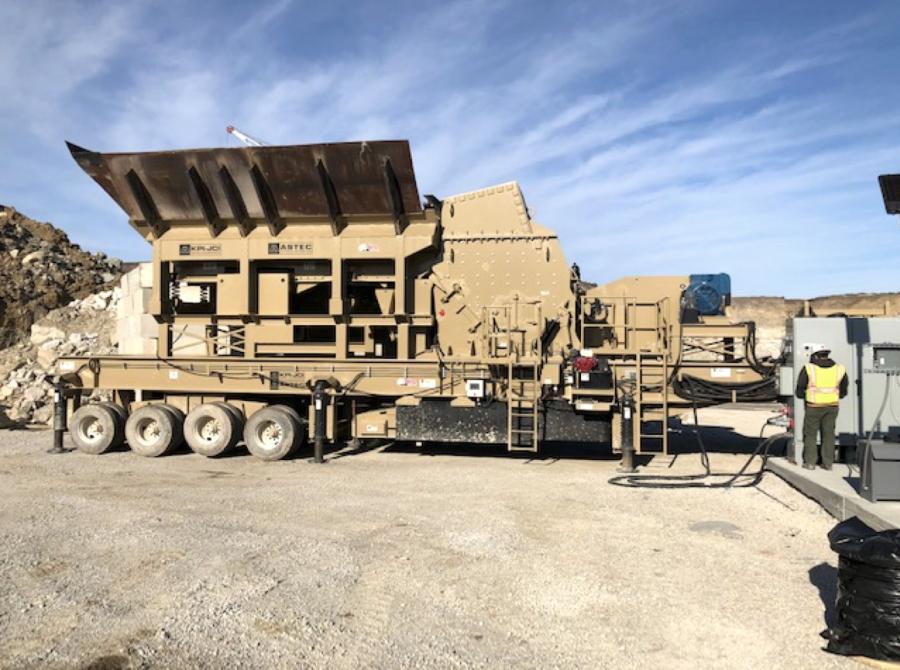 "That was a big help and is probably not something we would have thought on our own," said Loxley.

Downtime also has become more manageable without the need to run a 50-year-old plant at full capacity.

"We now have options that allow continuous production every day," he said. "We looked at several options and ultimately chose Finkbiner for its knowledge. From design to start up, they were right there assisting in all aspects. It was a very positive experience."

"We are proud to bring KPI-JCI AMS's capabilities of a total solution spread that brings best in class ROI," said Jason Zeibert, president of Finkbiner Equipment Company. "Their ability to offer engineered modular packages with customized structures allows quick labor assembly along with smooth material transitions and movement down the line." CEG