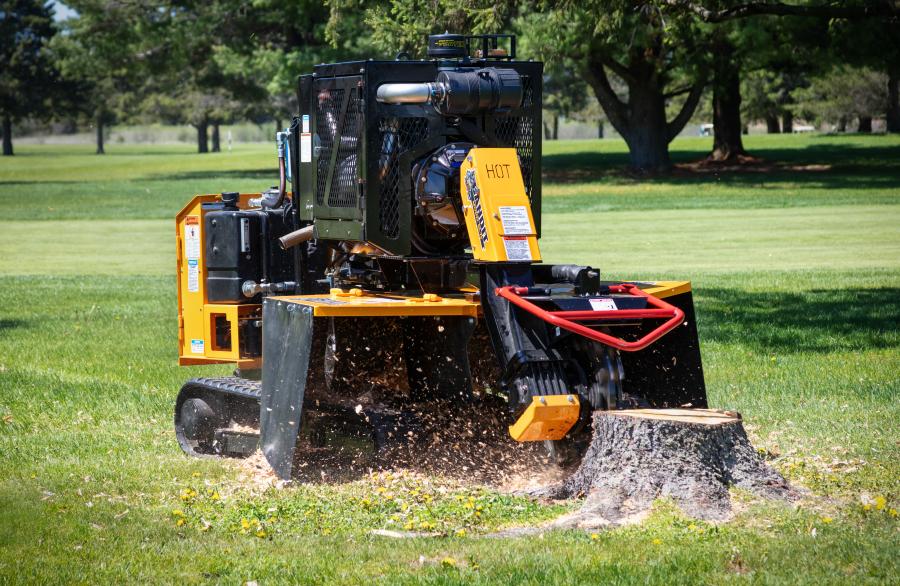 Bandit’s “Super Sweep” feature will move the wheel through the stump without overloading the engine and drive train, maximizing production.

The new Bandit SG-75 stump grinder has the power and speed to quickly dispose of large and small stumps in a backyard setting or in a land clearing application.

Power begins with the 74 hp Kohler diesel engine that transfers power through a gearbox drive system to a choice of 27 in. diameter grinding wheels. The expandable/retractable rubber track undercarriage allows the user to enter through a 36 in. gate and then expand to a 55 in. wide base, providing stability for working on slopes and uneven terrain.

Another feature that makes this stumper so popular is an 80 in. swing and 2-footcutting depth, reducing the need to reposition the stumper, giving the operator more time to grind the stump, according to the manufaturer.

Bandit's "Super Sweep" feature takes much of the guesswork out of grinding, according to the manufacturer. It will efficiently move the wheel through the stump without overloading the engine and drive train, maximizing production.

An optional grading blade is available for cleaning up after the grind.

Building on a more than half-century legacy, the new Cat 992 wheel loader sets a new standard by offering up to 32 percent greater productivity.

Edge Innovate's E SM186 wheeled mounted screener is a highly efficient screening solution designed for the most difficult and demanding of applications including recycling, soils, aggregates, compost and demolition waste, according to the manufacturer.