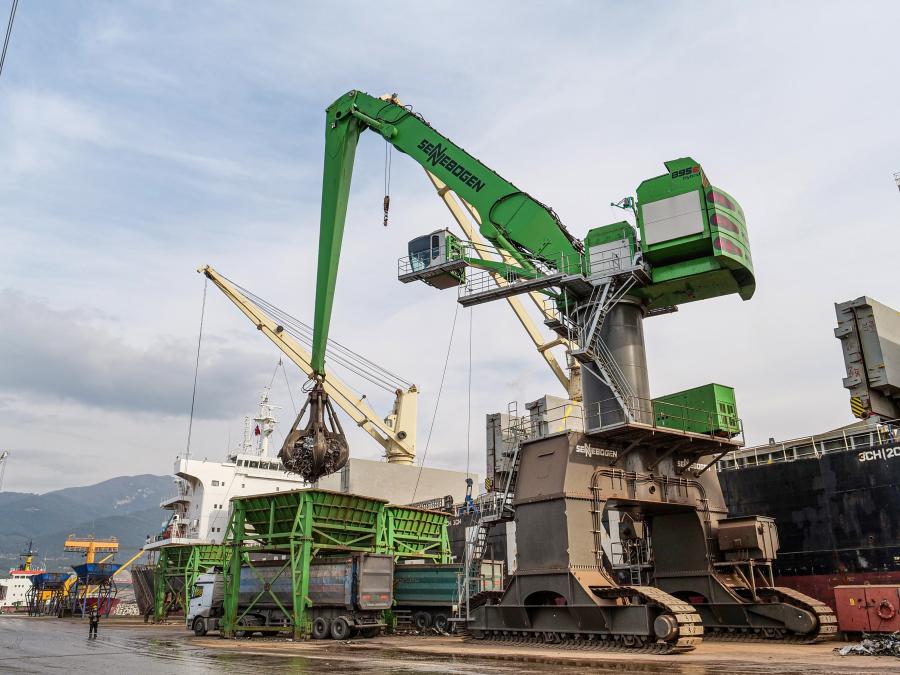 The electric version of the giant 895 Hybrid E-Series material handler in the Port of Iskenderun, with a 130 ft. (40 m) reach.

The world's largest purpose-built material handler, a 460-ton giant unveiled at bauma 2019, recently joined the ranks of working port machines. The Sennebogen 895 E-Series Hybrid was commissioned in October for the Tosyali Holdings fleet, at the Mediterranean port of Iskenderun, Turkey.

Since then, the 895 has been moving massive amounts of scrap metals around the clock, every day. Electrically powered, the machine never needs to take a break for refueling. As one observer noted, walking near the 895 conjures images of Jurassic Park, where tiny humans tread lightly past peacefully gracing brontosaurs. But this gentle giant is real.

Productivity On a Giant Scale

Everything about this machine is big and record-breaking. A convoy of 16 trucks transported the machine to Turkey. Sennebogen's Turkish distributor, Forsen Machinery, required just a few days to assemble its crawler platform, configure the set-up for Tosyali, and test run the 670 hp (500 kW) drive.

Its operators move quickly, perched in the highly responsive and accurate elevating Skylift cab as much as 72 ft. (22 m) above ground level. With Sennebogen's industry-leading hydraulics in hand, it allows for surprisingly quick cycle times, according to the manufacturer.

"We handle 10,000,000 tons a year in this port alone," said Harun Karaarslan, Tosyali's Technical port director at Iskenderun, in one of the Turkey's largest metal producing areas.

"Our machines are in constant use. We rely on our fleet to be producing constantly — downtime would be fatal."

The 895 material handler, of course, does not produce all that throughput alone. Tosyali's facility operates a total of seven material handlers, including two 600,000 lb. (270,000 kg) Sennebogen 880 EQ balance cranes. Both the 880s also run on electric drive. These machines, Karaarslan said, were a big part of Tosyali's confidence in moving up to the 895. 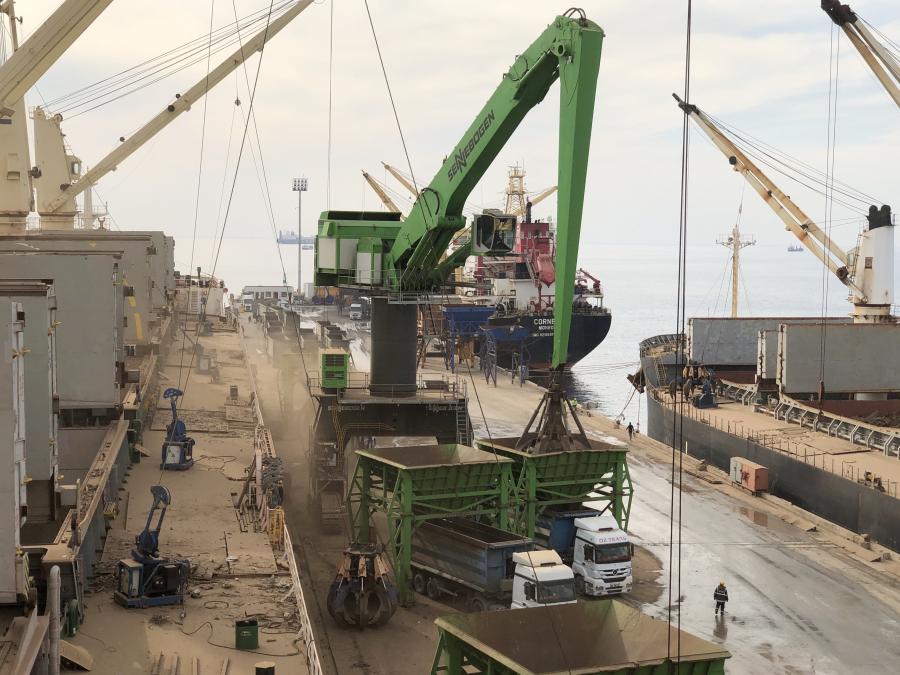 The sensitive and precise control of the 13 cu. yd. grab is used to safely and efficiently load trucks.

"Our experience with Sennebogen machines has shown us that using electric material handlers does not mean compromising on and flexibility or speed — quite the opposite. Despite their size, the machines cover a large work area, moving quickly up and down the pier. By not using diesel, we also save a lot of money every year."

Nevertheless, one would expect a significant energy cost simply to move the 895's huge lifting boom and stick — itself a 53-ton steel structure. But here again, the efficiency of the 895 towers above other material handlers.

The reason for that is the distinctive Green Hybrid energy re-capture system engineered into the 895's boom hydraulics. A pair of large hydraulic cylinders are mounted to either side of the main lifting cylinders.

On each downstroke of the boom, the Green Hybrid cylinders hydraulically compress the gas in the storage modules at the rear of the upper carriage. On the next lift cycle, the compressed gas is released to give the lift cylinders a power assist, effectively offsetting the boom's own weight, much as a compressed spring generates energy when it's released. As a result, the re-capture system saves up to 55 percent of the energy for every lift, all day long.

The operator's viewpoint from the elevated cab is ideal for loading and unloading bulk goods deep inside ships' hulls. Cameras mounted behind and on the right-hand side of the cab provide the operator with the 360-degree view of the entire work zone, allowing faster cycle and travel time, safely.

Sennebogen also offers a third camera location on the business end of the stick, near the grapple, for direct view inside holds, hoppers and other conveyor equipment. 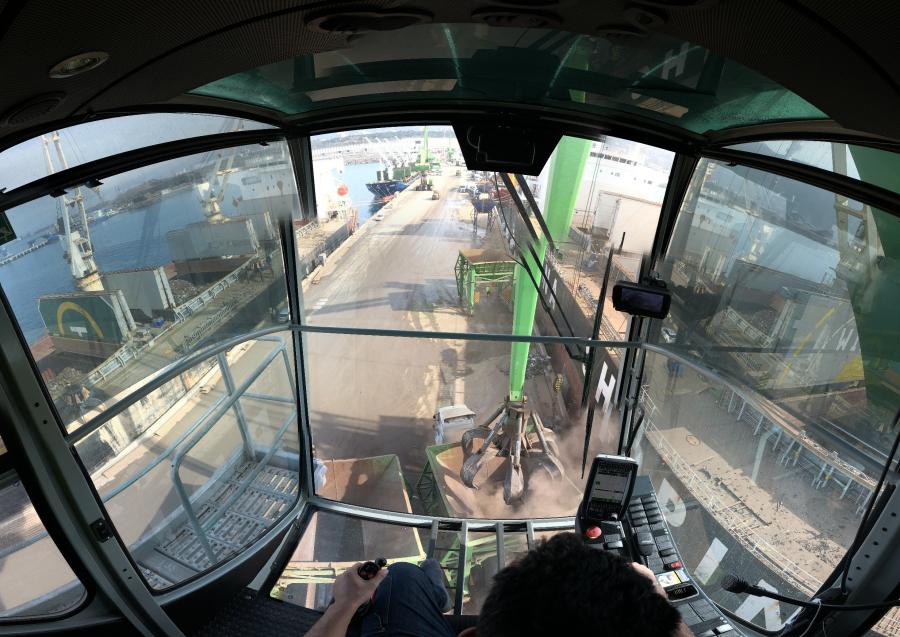 Operators can keep everything in view in the SENNEBOGEN Skylift port cab.