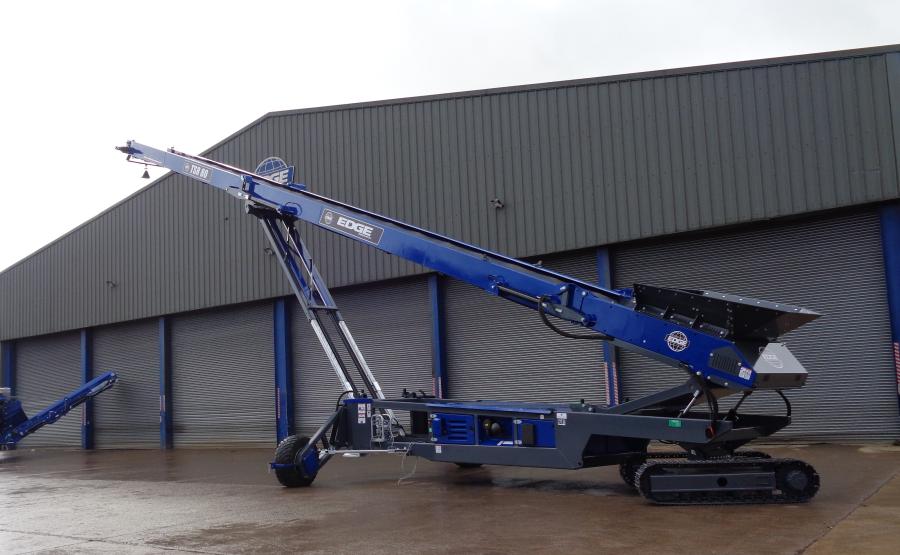 A global leader in the design and distribution of a range of equipment used in the quarrying, port handling and recycling industries, Edge Innovate has revealed its latest portable material handling offering with the launch of the TSR80.

The new mobile conveyor will take its place in Edge's ever-growing material handling product line up.

The Edge TSR80 is an 80 ft. long tracked mounted conveyor with radial stockpiling functionality. Essentially, the TSR80 has packaged all the advantages of a mobile radial stacker and that of a tracked mounted stockpiler into one product, according to the manufacturer.

The TSR80 has the ability to self-propel across even the roughest terrains and the capacity to create massive radial stockpiles. It is the perfect stockpiling solution for operators who frequently reposition their processing plant or want a conveyor to fulfil a number of different roles on-site.

The TSR80 offers operators a host of design features such as a high torque belt drive, 48 in. (120 cm) wide conveyor, hydraulic variable feed in height, adjustable operating angle, radial stockpiling functionality and quick transition from transport to operational mode. With a maximum discharge height of 38 ft. 10 in. (11.8 m) and 360-degree radial capability, the EDGE TSR80 can create stockpile volumes up to 40,947 cu. yd. (34,237 cu m). In addition, the TSR80 has an optional automatic stockpiling program which combines automatic radial drive functions and self-angle adjustment enabling the TSR80 to create huge radial stockpiles with minimal supervision and prevents material segregation.

The core design principal for the TSR80 has been to provide customers with a conveyor that could create large radial stockpiles and can easily be transported both locally and around site with minimal fuss or cost. The TSR80 has been designed to fold down with its own power source and to drive onto a range of low boys and low loaders.

Edge Innovate develops, manufacturers and markets technologies for shredding, stacking, screening and sorting of primary and secondary raw materials in production processes and recycling. Its material handling and recycling range is made up of products with a wide range of mobile stockpilers, tracked stackers, tracked and mobile feeders, trommels, slow-speed waste shredders, picking stations, material classifiers, roll-sizers and truck off-loaders. Its product range allows its customers to shred, screen, separate, stockpile and size a vast array of materials.