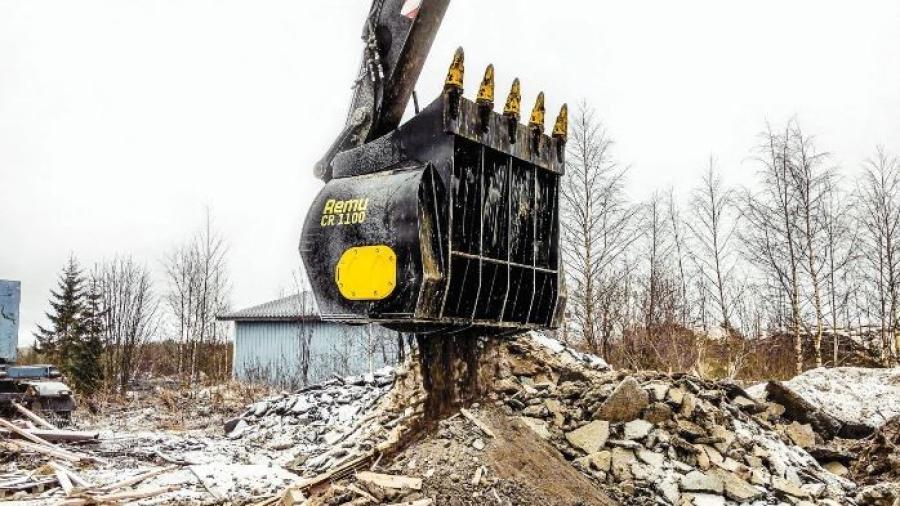 The operational principles of the CR 1100 are based on high torque and a slow rotating crushing drum that is powered by two direct drive motors that produce a maximum cutting force of 172kN (38500 ft lbf).

All around the world the use of secondary materials is increasing, supporting the circular economy and the efficiency of material usage.

Remu's new crushing bucket, the CR 1100, is designed to decrease the volume of most common materials from demolition sites including tiles, concrete, drywall and asphalt, according to the manufacturer.

The operational principles of the CR 1100 are based on high torque and a slow rotating crushing drum that is powered by two direct drive motors that produce a maximum cutting force of 172kN (38500 ft lbf).

When material hardness is less than 25 Mpa, the performance of the crushing bucket with a rotating drum is higher than those with the technology of a jaw crusher, according to the manufacturer.

"According to our tests the bucket performs well with mixed demolition waste including regular concrete, steel, wood, plastic, etc. High-strength concrete and hard stones like granite are still out of our range," Jussi Saari, leading engineer of REMU, said.

Marius Pedersen A/S is a leader in waste processing in Denmark as well as a leader in environmental sustainability.