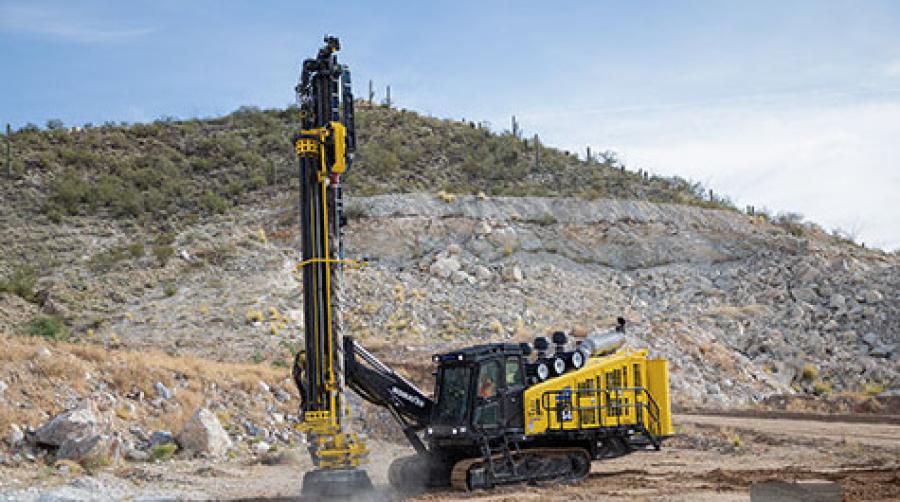 The Komatsu ZT44 track drill is a down-the-hole surface drill rig specifically designed for mining-duty applications. This track drill is a versatile machine, used for pre-split, production, auxiliary and any other application the end user demands, according to the manufacturer.

The ZT44 enhances productivity in challenging geology and has the flexibility needed to drill in a variety of settings, from small patterns and uneven ground conditions, as well as multiple angles and even de-watering, if required.

With the flexibility and smaller footprint to excel in the quarry, aggregate or construction environments, Komatsu said the ZT44 track drill separates itself in the mining market with its industry-leading production rates and durability.

"Meet your production demands with a machine that is made to keep up, working 24/7. In addition to the around-the-clock operation, this drill supports mining applications with the higher reliability and longer life you're looking for, offering versatility by meeting your needs for pre-split, production or auxiliary applications. Engineered for the harshest places on earth, the ZT44 is ready for around-the-clock operations. Equipped with a dual-pressure air compressor enabling high- or low-pressure drilling, the machine can efficiently adjust to changing drilling conditions to still achieve optimal performance."

For operations in extreme temperatures, the ZT44 can still meet availability needs, according to the manufacturer.

"The machines are equipped with a best-in-class heat exchange unit to mitigate high thermal loads produced during the drilling operation. A second cooler is dedicated to keeping hydraulic temperatures in an optimum working state, resulting in more time dedicated to drilling holes."