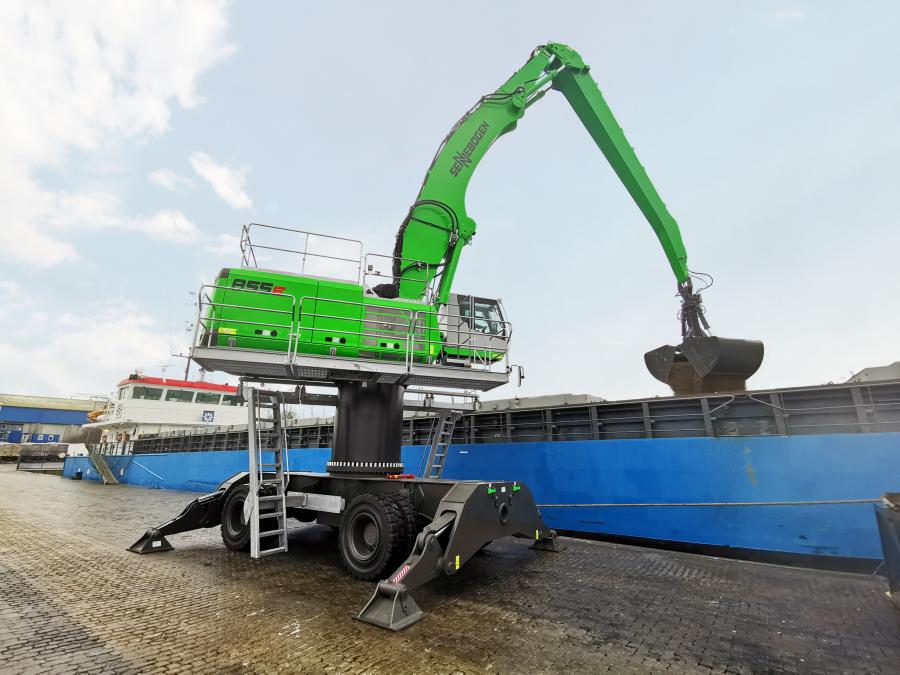 The Sennebogen 855 Green Hybrid loads ships at the Port of Vierow.

Exporters and stevedores working in the north German Town of Vierow have been admiring the performance of a towering green addition to the port's material handling fleet.

In early 2019, Viela Export GmbH commissioned its new Sennebogen 855 E-Series material handler. The difference between this and conventional material handlers is clear at a glance. It features an oversized central hydraulic cylinder between the two main lift cylinders of its massive boom.

That cylinder is the heart of the innovative energy-recovery mechanism that Sennebogen has named the "Green Hybrid" system — a major leap forward in lifting power and efficiency. Although the 855 model is a relative newcomer to the Sennebogen line-up, the Green Hybrid system has been proving itself in larger models around the world since 2013.

When the 855's boom is lowered, the giant recovery cylinder compresses nitrogen gas in an accumulator at the rear of machine. On the next lift, this stored energy is released to assist in raising the load. The result is a significant reduction in demand for engine power, while the 855 works with almost constant power throughout the cylinder cycle. With this simple hydraulic solution, the machine saves up to 30 percent of the energy cost to complete each of its heavy lifts.

But Viela was looking for more than savings in its new equipment.

"The versatility of Sennebogen machines played a big part. We were able to configure a material handler that met our requirements to the letter," said Henning Bligenthal, CEO of Viela Export.

Powered by an efficient 309 hp (231 kW) Tier IV Final diesel engine, this unit is equipped with a 6.5 ft. (2 m) pylon mount that allows operators a better view into the ship's hull. It was spec'd with a 65 ft. (20 m) banana boom, which extends its reach into the hold even at the lowest points along the ship's hull.

Sennebogen's signature Maxcab, which elevates and moves forward hydraulically, provides a viewing height of up to 25 ft. (7.5 m) directly into the hold. The guarded gallery around the upper carriage and the sliding door entry to the cab also contribute significantly to the operator's safety.