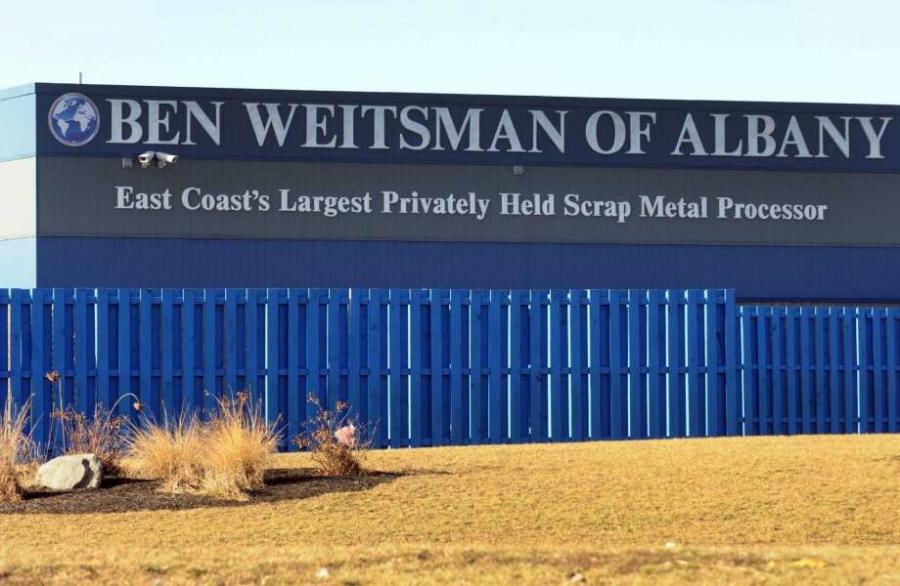 Ben Weitsman of Albany has begun work to add a scrap metal shredder at the facility located at 300 Smith Boulevard in the Port of Albany. (timesunion.com photo)

Ben Weitsman of Albany, a division of the East Coast's largest privately held scrap metal processor, has begun work on a multi-million-dollar project to add a 3,000 hp Riverside Engineering scrap metal shredder at the facility located at 300 Smith Boulevard in the Port of Albany.

Once complete, all shredding for Albany will occur on-site, which will enable final shred product to be sold and shipped direct from the Port of Albany via truck, barge, deep sea vessel and rail. The new shredder, which will add 20 additional positions at the Albany facility, has a 70-in. mill and is capable of shredding 80 tons of scrap material per hour.

All ASR material, a by-product of the shredding process, will be sent to the main facility in Owego, N.Y., so the nonferrous can be further processed through the eddy currents, micro fines plant, wire chopping plant and newly commissioned dry media plant, a processing technology that further processes zorba, a shredded mix of non-ferrous metals consisting primarily of aluminum generated by eddy-current separator or other segregation techniques, to separate out the aluminum from the heavies (copper, brass, zinc, and stainless).

Ben Weitsman of Albany, which was a newly constructed scrap metal recycling facility that opened in August 2013, has become one of Upstate Shredding — Weitsman Recycling's highest customer volume yards in the network.

“This is a plan we have had in the works for some time and I am happy to announce that work on the shredder is under way and once complete, will add more jobs and revenue to the local economy. In addition, this will be the third shredder for the company and is perfectly positioned within our geographic footprint to complement our shredding operations in Owego, N.Y., and New Castle, Pa. In 2019, our goal is to process one million tons of shredded scrap alone between the three shredders and given current scrap volumes at our feeder yards we feel this goal will be easily attainable,” said Adam Weitsman, CEO of Upstate Shredding — Weitsman Recycling.

Weitsman has been credited in the industry with ushering in 'the new age of scrap yards,' complete with fully-paved yards and brand-new buildings, technology, equipment, fencing and landscaping. The Binghamton, Jamestown and Owego Weitsman facilities were recently renovated and the Albany retail scrap yard and New Castle retail scrap yard and shredder were recently built as new operations from the ground up.

In addition, the Syracuse, N.Y., yard is currently undergoing a $5 million renovation and the company recently began operations at its brand new dry media plant in Owego. The micro fines plant, which extracts precious metals from shredder residue, will also be fully operational in Owego in August.

Upstate Shredding – Weitsman Recycling is the East Coast's largest privately held scrap metal processor, operating 17 locations throughout New York and Pennsylvania. In 2014 and 2016, Weitsman was honored as the top scrap recycling company in the world by S&P Platts Global, the premier resource for metals and mining worldwide. The company also won the award for Scrap Company of the Year from American Metal Market in 2015 and 2016.

Due to a dynamic expansion and the realignment of its recycling capabilities, McCloskey International has announced a new brand identity that will support the evolution of this business unit and reinforce its commitment to the waste recycling sector worldwide.

Boris Grinstein reflected on the growing fleet of equipment working in his Action Metals recycling yard, just off the I-45 near downtown Dallas.

Specifically designed for its mobile crushers, Sandvik endurance packages are configurable and can be tailored to meet specific customer needs and requirements.

Imagine a construction site inside a large urban center or a heavily populated metropolitan area. Now picture how you'd organize that job, especially when there are restrictions imposed on the location such as: limited to when you can run your equipment, logistic difficulties due to traffic restrictions, and containing noise and dust emissions.

Larsen Dirtworks LLC of Foreston, Minn., knows its stuff when it comes to crushing rock. EvoQuip customers for a few years now, it is an expert in the industry and prides itself in helping customers run smooth and lucrative operations.

Durex Products Inc. , based in Luck, Wis., will display its screen media, liners, wear parts and screen accessories in booth 1147 at Nashville Music City Center, March 29 to 31, in Nashville, Tenn.

Sandvik announced the appointment of Diesel Machinery Inc. (DMI) as its authorized distributor for its range of mobile crushing and screening equipment in South Dakota.